Whales in the Algarve: minke-whale in the Ria Formosa 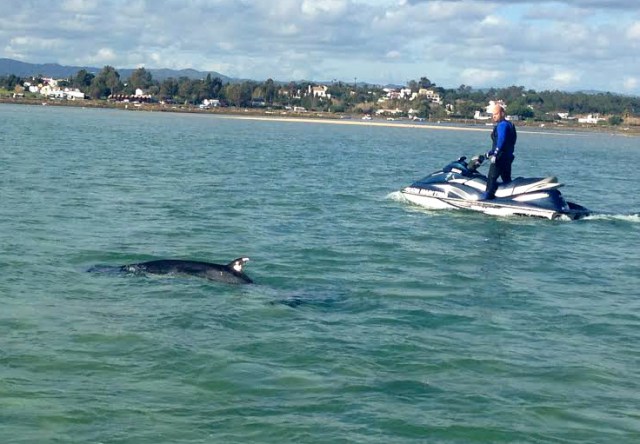 Normally, whales in the Algarve are often sighted further offshore, along the entire coast. In this case, the animal decided to explore the Ria Formosa, a natural park in the Algarve.

The whale was swimming around the Ria Formosa for the whole day on February 1st. Pedro da Palma, captain of the Marina of Vila Real de Santo António and Tavira reported that the animal entered the Ria in the morning near the marina of Tavira. The minke-whale swam to Fuseta, where it left the marine park at the end of the day. However, “due to the fact that the tide was low, the whale was stranded in a shallow spot and needed support to be able to swim again,” said Pedro da Palma.

Fortunately, the whale was not injured and its route to the sea was supported by the Local Commands of the Maritime Police of Tavira and Olhão, in collaboration with the Institute of Conservation of Nature and Forests (ICNF – Instituto da Conservação da Natureza e Florestas in Portuguese).

Dolphins and whales in the Algarve

In 2016, the most observed species of dolphins and whales in the Algarve were Bottlenose dolphin (Tursiops truncatus) and the Common dolphin (Delphinus delphis). Other species of cetaceans of less frequent sighting are the harbour porpoise (Phocoena phocoena), the risso’s dolphin (Grampus griseus) and the orca (Orcinus orca).

Regarding whales in the Algarve, Dream Wave recorded the sighting of three species: 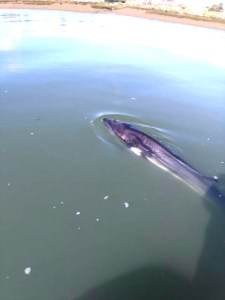 The minke-whale can be distinguished from other whales by a white band on each flipper. They have a length of up to 9m, with females being larger than males.

If you are interested in meeting the whales in the Algarve in person, we invite you to come on board one of our whale watching tours.