The best way to start your day:

Read the experience of Nathalie, content and translations at SeaBookings about her SUP Grotto Tour in Lagos. Thanks for sharing, girl! 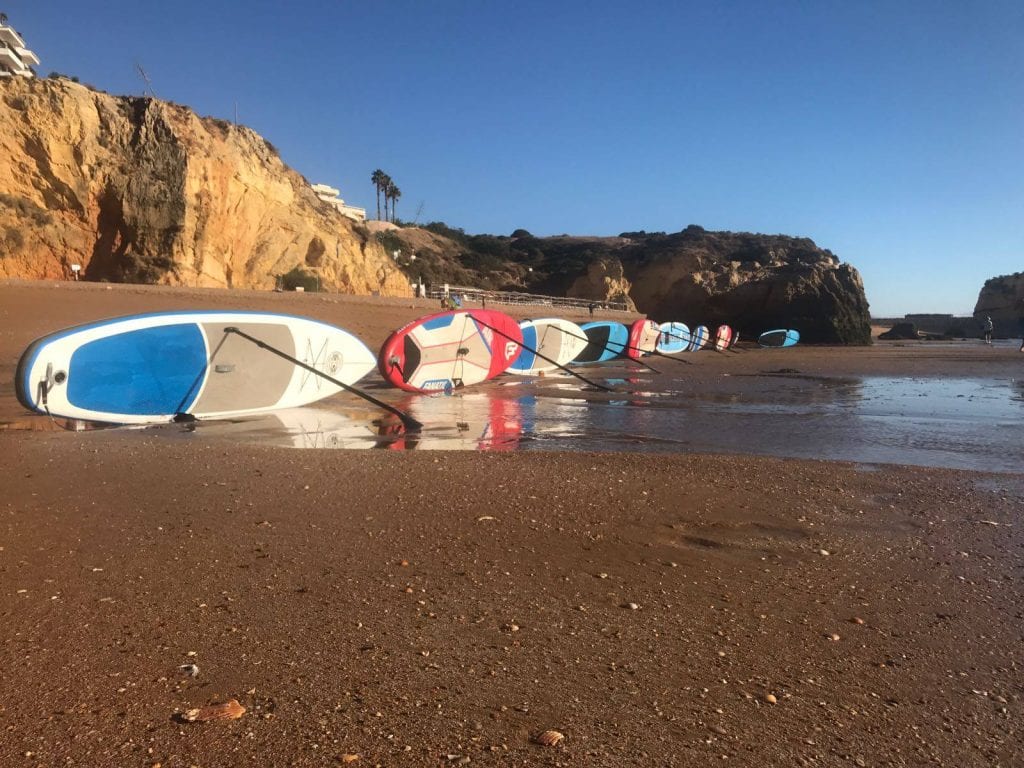 SUP board are very big and stable

The early bird catches the worm, they say. Well, in this case, the early bird gets to enjoy the most beautiful SUP Grotto Tour in Lagos!

When my dad visited me in Lagos last year, I wanted to make sure he had a great time in the Algarve. He loves surfing and the ocean, so I thought that maybe a SUP Tour in Lagos would be a great idea. And I was absolutely right!

We opted for a SUP Grotto Tour in Lagos, which meant that we met at Praia Dona Ana at 8 am. For those staying in the centre of Lagos, this beach is super easy to reach by foot. But the SUP school also offers a pick between Burgau and Lagos for those staying a little further away. 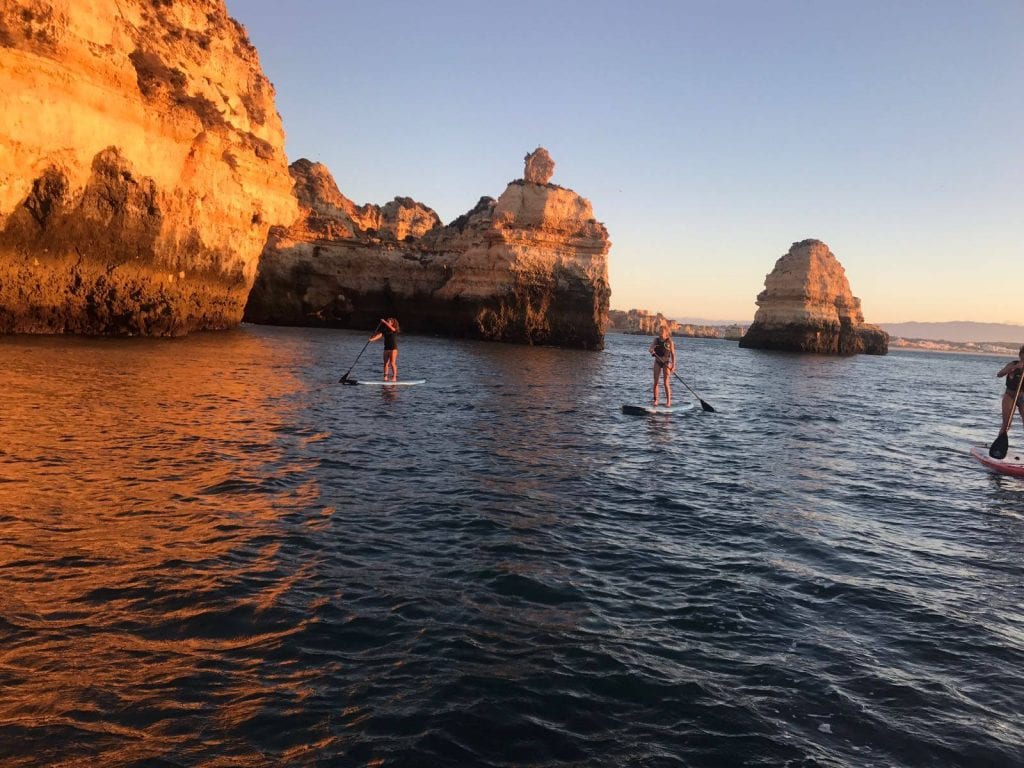 The light at this time of the day is just absolutely magical. Praia Dona Ana, usually a busy beach full of people, is a true paradise this early in the morning. Peaceful and quiet, with the calm and clean Atlantic Ocean in front of it. Only for this view of another beautiful day starting in Lagos it was already worth getting up so early.

Once everybody had arrived, our young and very friendly guide gave us our boards and paddles, depending on our experience and strength. Since my dad already has been doing SUP for quite a while, he got a board that was great for more advanced SUPers, while I got on one of the really big boards where you don’t have any troubles at all getting up.

Our guide was in a super good mood, that reflected the overall atmosphere of the small group of about 8 people. We learned some basics about SUP on the beach, and then it was time to hit the water! 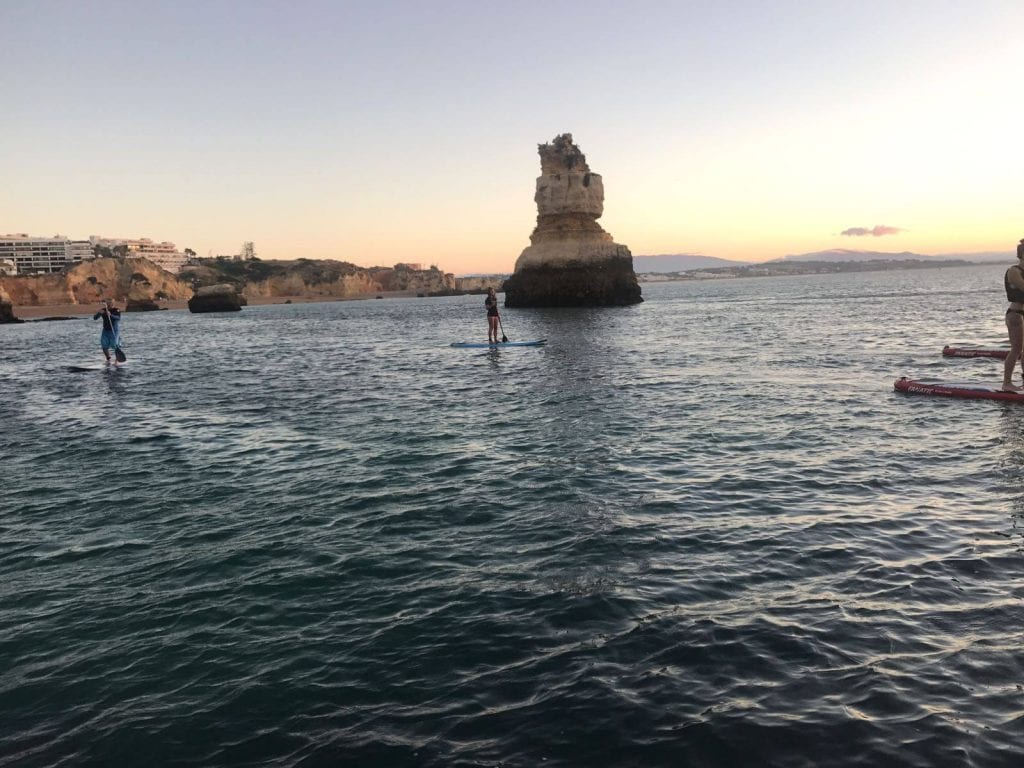 SUP is done in small groups

Getting in the water and on top of the SUP board is very easy, especially with the really big and stable boards like mine! You just knee on the first and then get up! And that’s it, you’re ready to go! Easy right?

With the calm and blue Atlantic Ocean underneath our feet, we started paddling towards west, in direction of Ponta da Piedade. After the first 5-10 Minutes of paddling, we already passed some beautiful rock formations that lie in the middle of the ocean. We paddled around them, getting really close to natural beauty in its purest form.

While my dad and I are quite sporty and paddled rather fast, there were also some of the group that took it more slow and relaxed. Our guide made sure that everybody was safe and gave us tips and tricks on how we can improve our technique. He also told us about the rock formations and showed us where to paddle best, so that we can see all the hidden corners of the coastline.

With the morning sun always shining on us, we paddled along the beautiful coast of Lagos until Ponta da Piedade. On the way there, we even paddled through some grottos and into some caves! Our guide always made sure that we were safe, telling us when we should knee on our boards rather than stand up and when to be careful with the waves. Getting so close to the beautiful rock formations in Lagos is a real adventure, and everybody on the tour loved it! 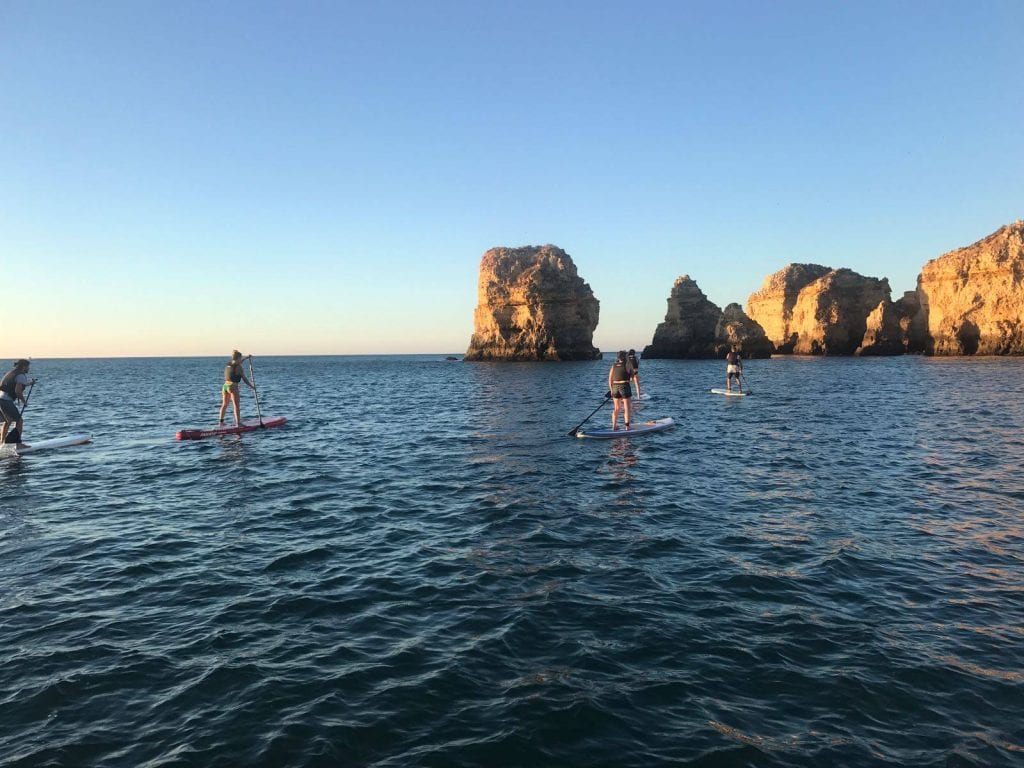 The whole group had a blast!

Once we reached Ponta da Piedade, we paddled a little further around the corner. In the distance, we could already see Praia da Luz. Then it was time to paddle back. Because the wind was coming from the east, the way back was a lot harder! But thanks to the help of our guide, we had already developed a strong paddle technique!

When we almost had reached the beach, the sun was already quite strong. The clear and fresh ocean was definitely inviting us for a little swim! Just in front of the beach we all jumped off our boards and cooled off in the Atlantic! The best ending to this beautiful SUP Grotto Tour in Lagos!

The SUP Grotto Tour in Lagos was definitely the highlight of my Dad’s holiday in Lagos! Just like everybody else on the tour, we both thought it was the best possible way to start the day. The view of the beautiful caves and grottoes in the morning light is just amazing. SUP is such a fun sport, and after we felt that we really deserved a delicious breakfast in town!

Luckily, the guide took photos of us and from the surroundings during the tour! So we were able to share this beautiful experience with our friends. The photos reflect the great atmosphere and make for a good memory of a perfect SUP Tour in Lagos!

So if you are on holidays in or around Lagos, you definitely have to go on a SUP Grotto Tour in Lagos! I promise you won’t regret it. It will be the highlight of your holidays in Lagos!