Things to do in the Algarve

We visited the Benagil caves with the family

By Bo, co-founder of SeaBookings, working from Lisbon:

We were on holiday in Carvoeiro, a small fishing village in the Algarve, with my boyfriends’ family, this year. We had 4 kids in the group, from 1 to 6 years old. The kids just love the beach, so most of the days, we spent the mornings on the beach and the afternoon by the pool. Praia Vale Centeanes and Praia do Carvoeiro are our favorite beautiful beaches. 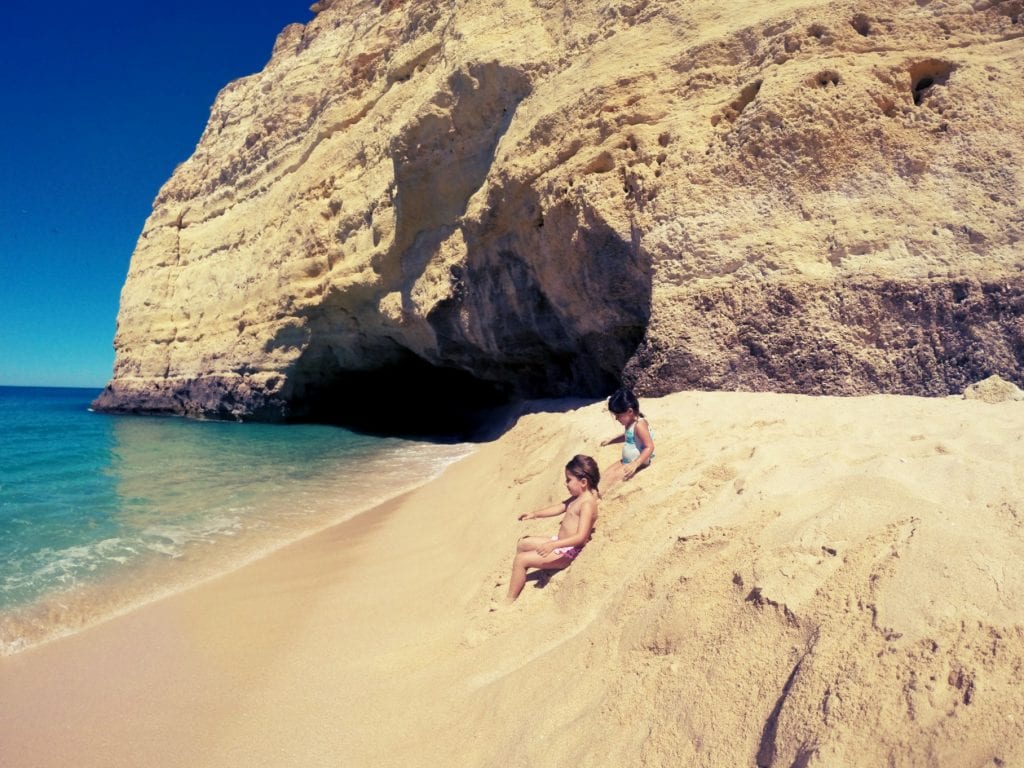 Praia Vale Centeanes is very nice for the kids to play

As we were staying in Carvoeiro and given that “I work with boat trips”, of course, I had to invite the family for a boat tour to the Benagil caves. We decided to go on the one-hour cave tour from Carvoeiro beach to the Benagil caves. One hour would be more than enough for Zé, Lu and Graça (6, 5 and 4 years old), while Inês would stay on land with the youngest, Teresa of 1 year and 3 months. Teresa could also join the tour but Inês prefered to stay on land with her.

We were lucky to be able to walk to the beach where we’d depart from, Praia do Carvoeiro. We took the 10AM tour, like Teresa from the tour operator recommended, so it would not be too hot. After putting on some sunscreen and a hat on the kids, we were ready to put on lifejackets. Lifejackets are mandatory on this Benagil cave boat tour. The kids were super excited with their colorful children-life jackets. 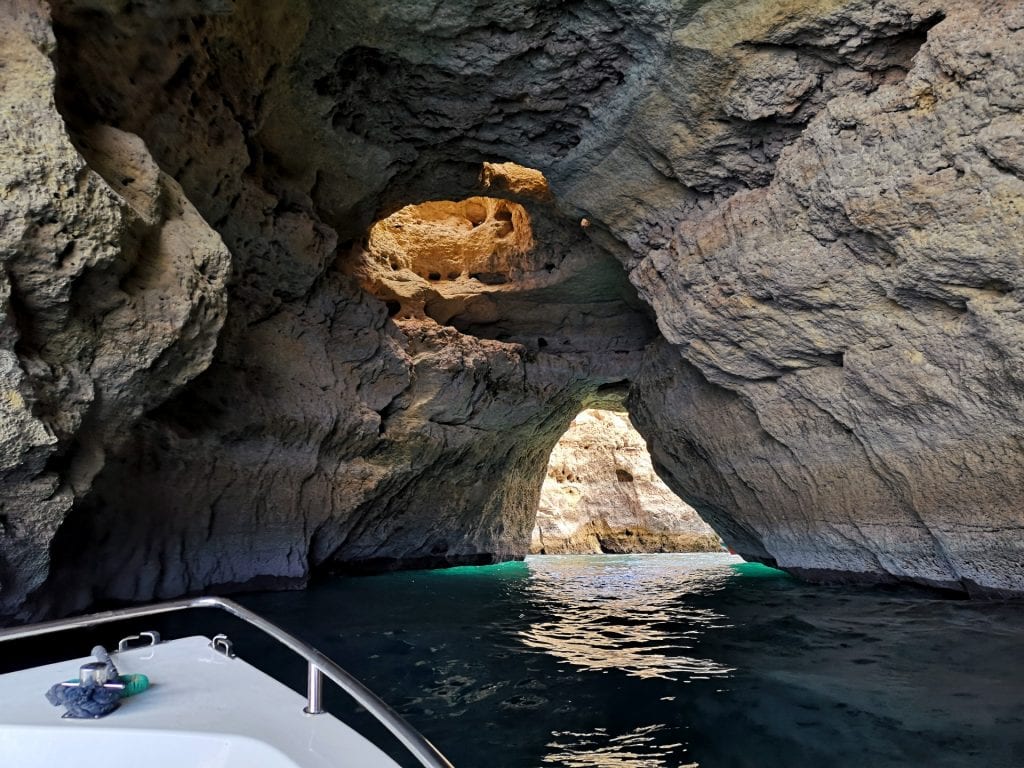 The rock formations of the Algarve are truly unique

To board the boat, you’d take your shoes off and step onto the boat from the edge of the beach, where the water starts. Then, once we were all in the boat, the guys on the beach pushed us deeper and the skipper turned on the engine. As we were a group of 7, we only had one other couple on board. There was plenty of space and of course, the youngest ones wanted to venture to the front-seats of the boat. 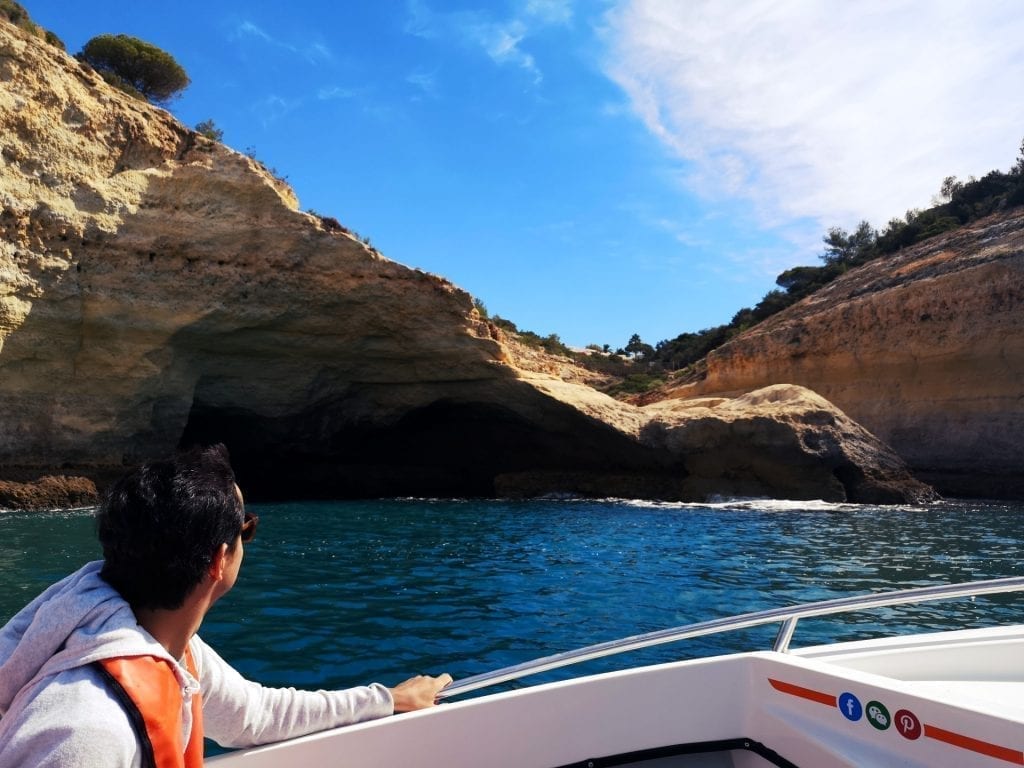 You’ll enjoy the coast from a different perspective

We immediately turned left, in Eastern direction, toward Benagil. Our skipper and guide presented himself and told us about the boat ride we were going to do. As soon as we moved away from the shore, we could appreciate a unique point of view over the stunning coastline of the Algarve. The red-brownish colors of the cliffs contrasted nicely against the blues of the sea and the sky. The skipper started telling us about the rock formations we were cruising by. As a local, he knew all the names of the sea caves and rock formations and gave us some tips about the things we could do in the region. 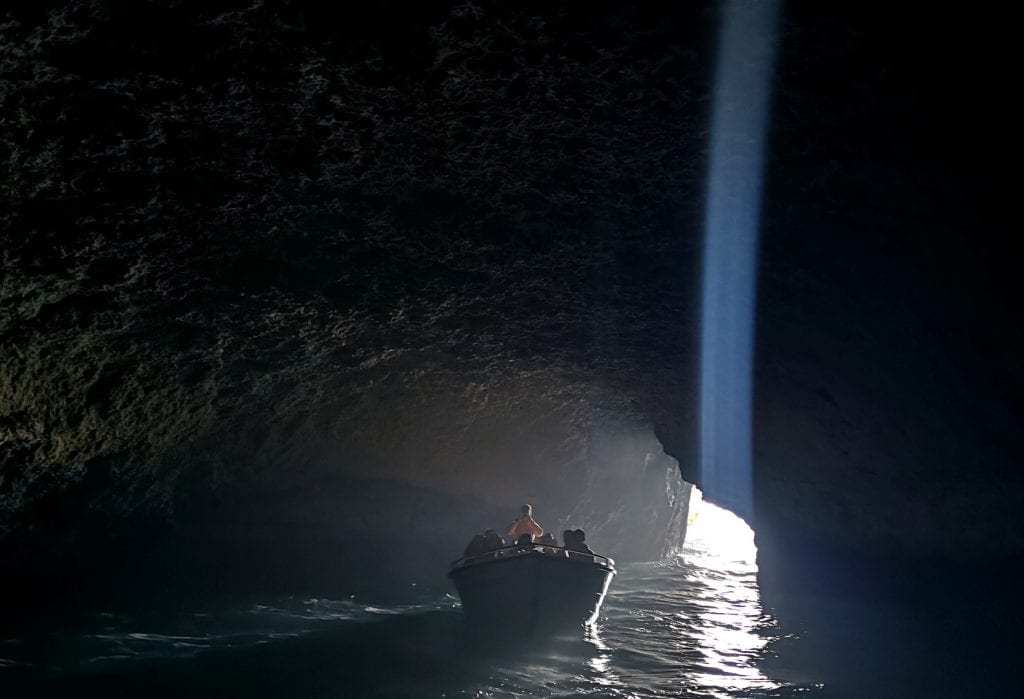 We even ventured into some very dark caves!

It was very nice to cruise by the beaches we had visited before and see them from a different perspective. We were impressed about how the whole thing about the Benagil cave tours is always about Benagil. In fact, it should not be Benagil cave but Benagil caves. Plural. Because there are so many caves in the region of Benagil! Some of the caves we visited before reaching the Benagil cave were even more dreamy than the Benagil sea cave. There was one cave that was truly unique. It had water falling from its eye in its ceiling and the sun shining through. It was incredible! 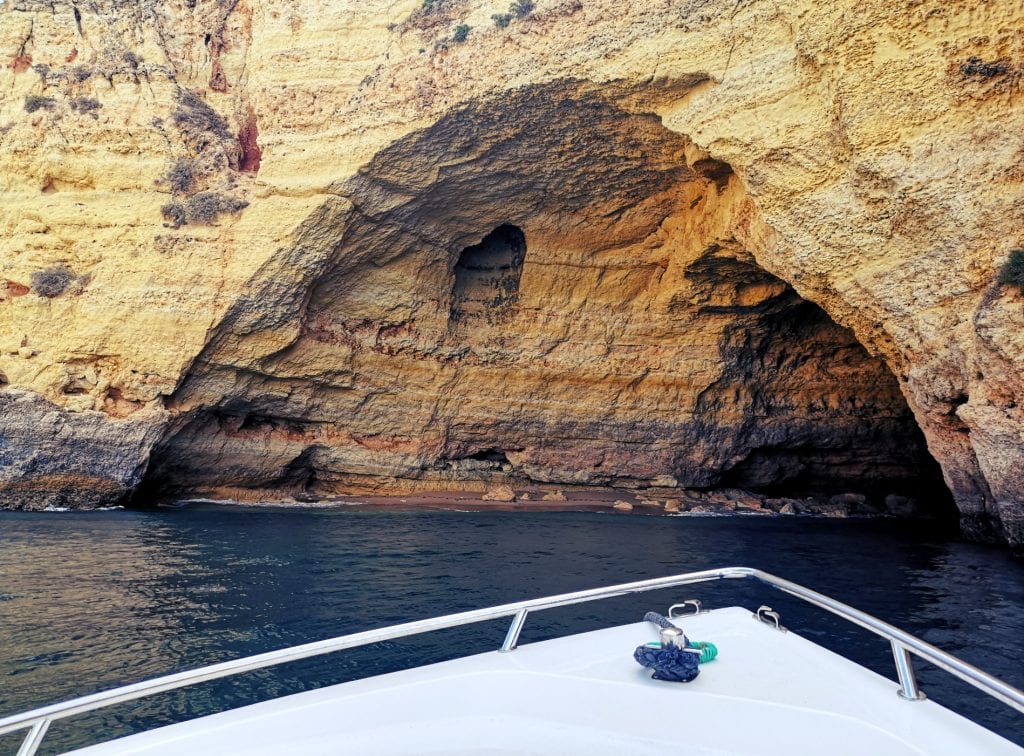 The contrast of the colors is amazing

The guide quickly understood that the kids loved the moments of acceleration, so he started to do some speedy curved when we’d exit a cave. The kids loved it. The smiles on their faces were priceless. Another moment we will never forget, was when we got into a very dark cave. You could see a feeling of admiration and a slight fear in their eyes. It’s really nice to be guided by a local guide as he’ll tell you the names of some of the caves and rock formations and some of the history (or stories) behind them. The kids just loved the “pirate cave”, the “love cave” and the “turtle cave”. 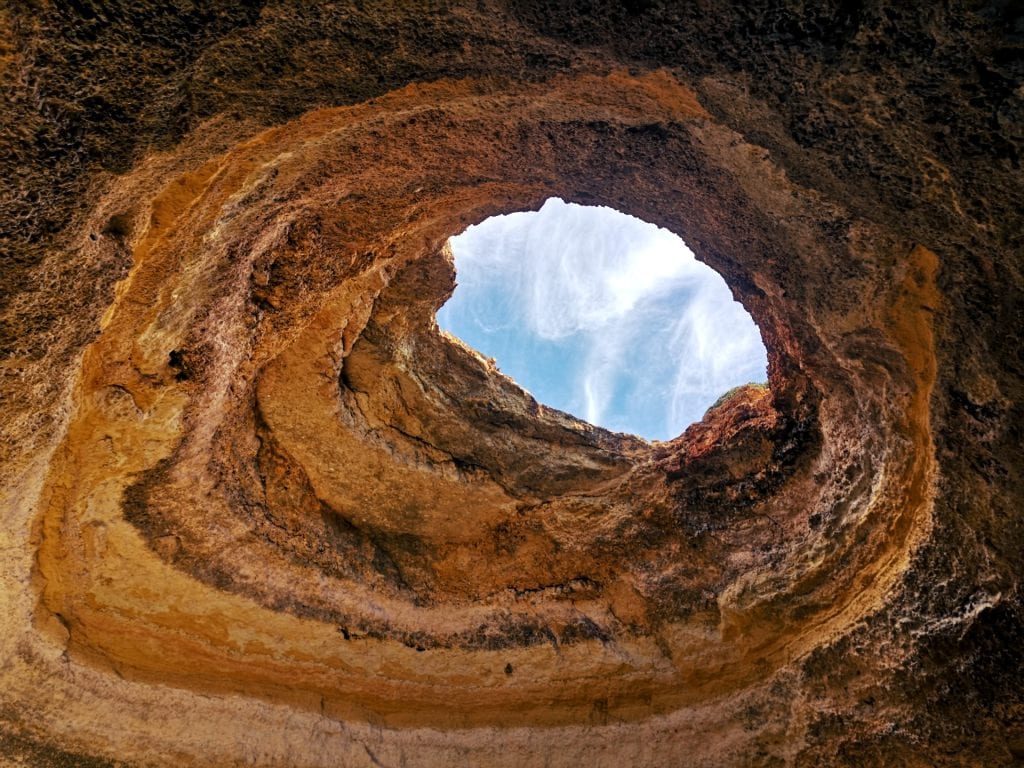 Yes, there are many hidden caves to explore around Benagil. That’s why departing from Carvoeiro is a big plus. You get to see a lot of the Algarve caves in between Carvoeiro and Benagil. After seeing the imposing Benagil cave, it was time to turn around and head back to Carvoeiro. We do so, by moving away from shore and then: speed! We had a blast on our way back. The wind in our faces tasted just great! 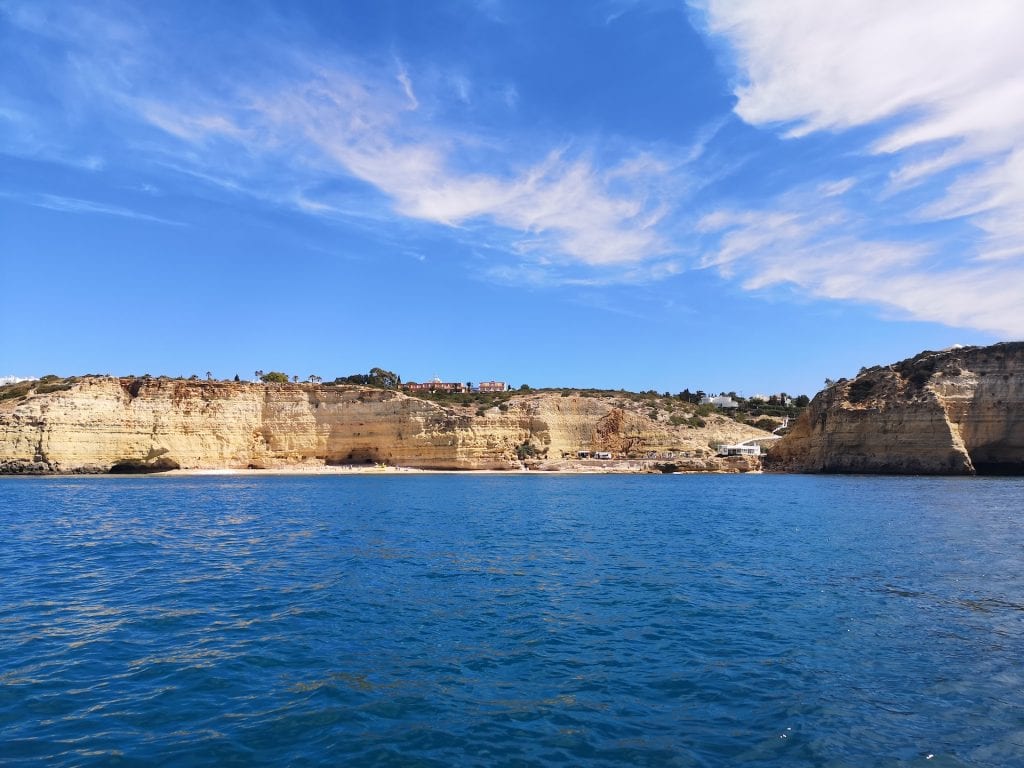 The whole coastline is unique and impressive, so a boat tour is worth it!

We’d like to thank the whole team at Carvoeiro beach for this amazing experience with the family. The children loved it, but of course the adults too. We were all very surprised by the number of caves the Algarve coastline offers and impressed by the driving skills of our skipper! This tour is highly recommended if you want to visit the Algar de Benagil and for you, one hour on a boat is enough 😉 If you’d like to go up to the arches of Marinha, you can join this 1,5-hour tour from Carvoeiro to Praia da Marinha.

The best watersports and boat tours in Portugal

What to do in Azores