The best of Algarve's caves

If you’re planning your holidays to Portugal, more specifically to the Algarve, you’ve most likely already heard of the Algarve caves.

In fact, the coast of Portugal is known for its impressive caves and rock formations. In this article, we’ll share the TOP 5 Algarve caves you can’t miss.

Therefore to write this article, we’ve spoken to some of our partners who know the Portuguese coastline like no other.

Local fisherman and skippers of the popular cave boat tours are experts on the caves of Portugal. Most importantly, they were proud to share their knowledge about the caves in the Algarve for instance.

In other words, we have experienced many cave tours along the Algarve, the caves are a must on your next holiday.

The top 5 ocean caves of Algarve you can’t miss are: 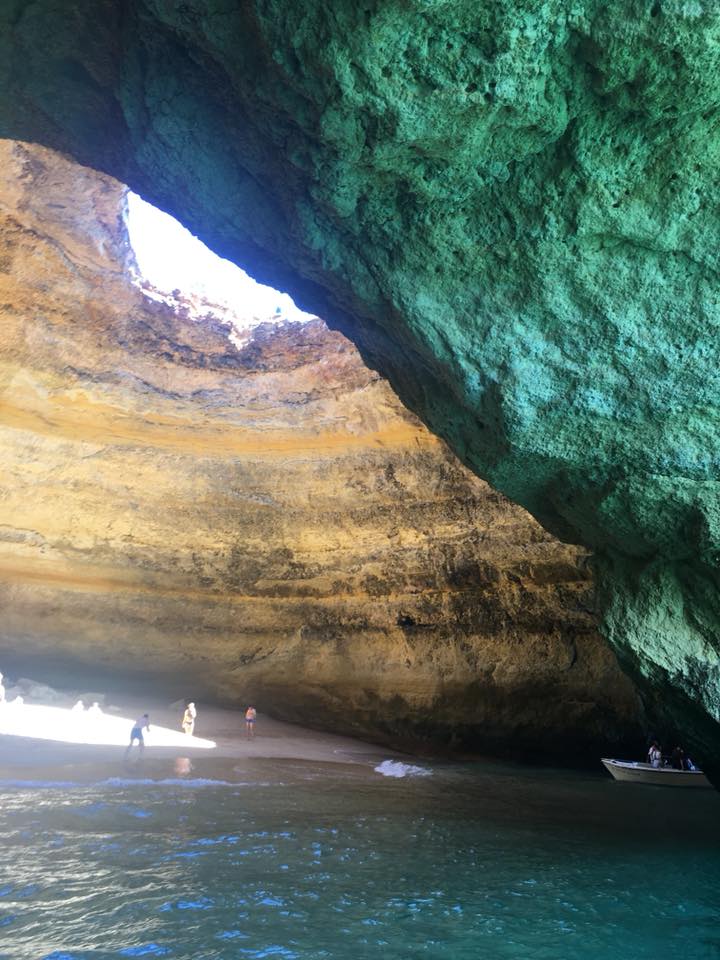 In 2014, this popular ocean cave of Portugal was listed in the world’s “Top 10 Coolest Caves” by American magazine The Huffington Post.

Well, if this is a worldwide know cave, it surely is one of the best of the Algarve’s caves!

Where and how to get to the caves of Benagil?

The cave of Benagil is located in the Algarve, on the south coast of Portugal. Just next to Benagil beach.

The nearest city to this grotto is called Lagoa. Benagil itself is a small village mostly dedicated to fishing. The Benagil cave is located just next to Praia de Benagil.

The amazing Benagil sea cave is not easy to access. The caves and grottoes are only accessible by boat, kayak, SUP or if you’re a good swimmer, swimming.

However, if you like adventure and would like to swim to the Benagil cave, make sure the ocean is very calm. As entering the caves by boat is already a great adventure.

The safest way to reach the grottoes is by boat and this is suitable for all ages. Boat tours to Benagil depart daily from the Carvoeiro beach, Lagos, Portimão, Alvor, Albufeira, Faro or Armação de Pêra. 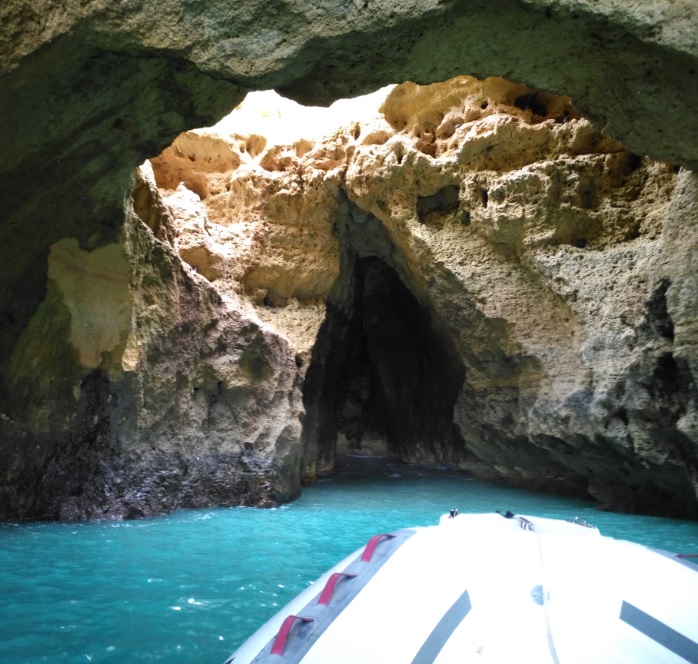 Out of the about 20 caves that are part of the boat tours to the Benagil cave, the cave of Zorreira cave is definitely one of the most impressive one. 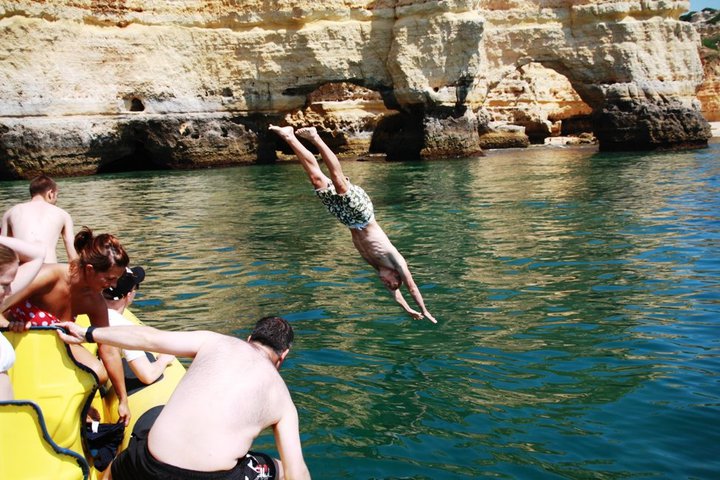 The beach of Marinha is one of the most emblematic beaches of Portugal. This beach is also located in the region of Lagoa. Thus this beach is certainly a beach you should visit on your holidays in Portugal.

Marinha Beach is very popular for its stunning rock formations and crystal clear waters. As the ocean is generally very calm here, it’s a great spot for snorkelling.

The wide range of rock formations are a preferred habitat by local marine flora and fauna.

The rock formations around the Marinha Beach have two arches. The arches of Marinha are one of the known symbols of the Algarve.

Therefore, local fishermen and skippers consider these arches as a place of Portugal you should not miss.

We conclude, the best way to explore the two arches of the Marina beach is by boat. Most boat tours to the Benagil cave mentioned above also pass by these breath-taking arches. 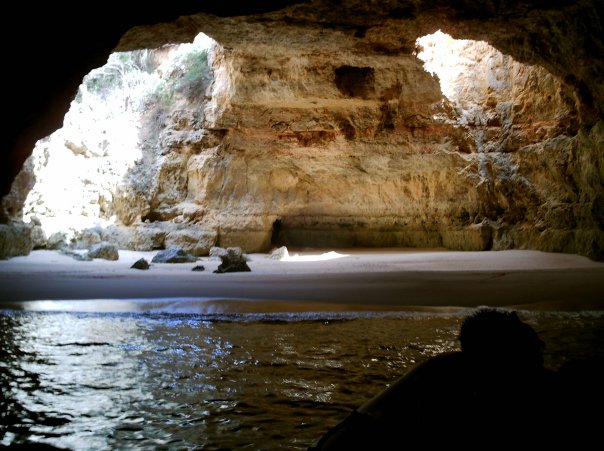 The Captain’s cave as locals call this impressive cave in the Algarve is also one of our favorites. This cave is located in between Carvoeiro and Armação de Pêra. Next to Praia da Estaquinha and Praia do Barraquinho.

This cave is very difficult to access. In fact, it’s a privilege to be able to access this Algarve cave as you cannot reach it by for or swimming, only by boat. Even by boat, this cave is hard to access.

Capitan’ cave can only be seen closely if the ocean conditions are perfect. Low tide and no waves are the perfect conditions required to visit the Captain’s Cave in the Algarve.

A visit to this Algarve cave is part of the Caves & Dolphins boat tour which departs from the Marina of Albufeira.

This boat tour is one of the most popular boat tours of the Algarve, as it combines two things: dolphin watching and visits to the stunning caves of the Algarve. Most of the cave tours in the Algarve visit this cave in small fishing boats. 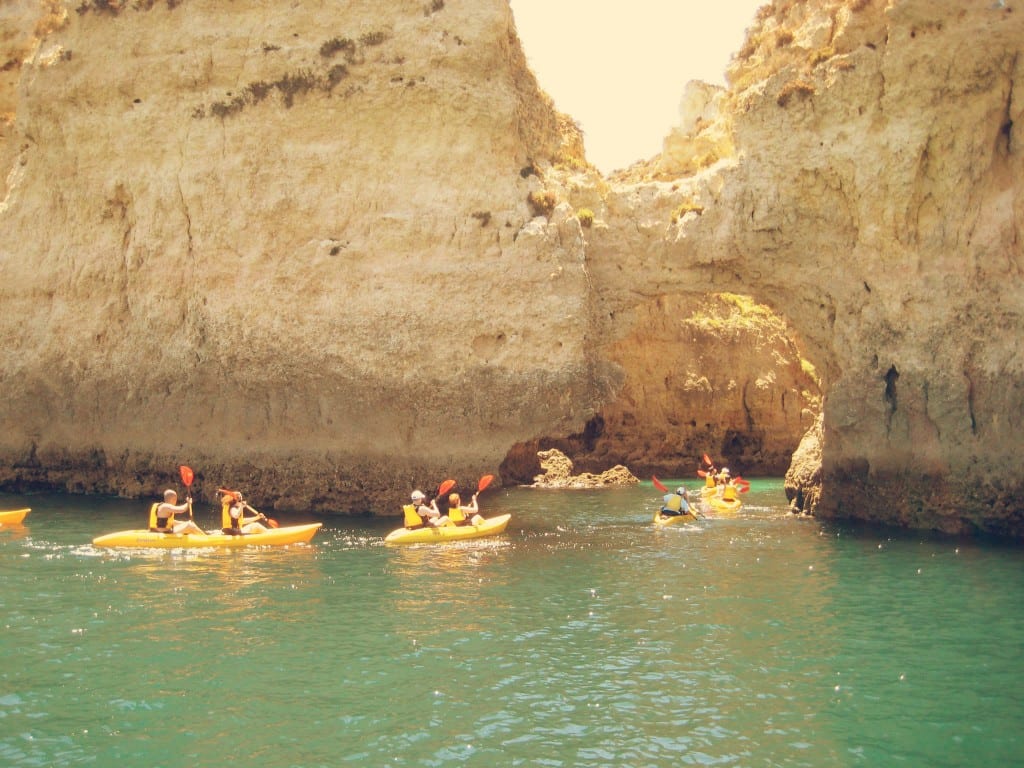 The cave called “Elefante” is located in the area of Ponta da Piedade, Lagos. Lagos is a picturesque fishermen village (or city). When visiting Lagos, the “Elefante” ocean cave is the one you should not miss.

The local fishermen and skippers of the boat tours in Lagos are sure that the “Elefante” is one of the most impressive ocean caves of Portugal.

So, when you’re visiting the Western Algarve, you should go to Ponta da Piedade.

What, where and how to get to Ponta da Piedade?

Around Ponta da Piedade you can find many grottoes you can visit on a boat tour, kayak tour or standup paddle tour.

The “Elefante” rock formation in Lagos is a cave of Portugal you should not miss, because it’s included in the most beautiful set of caves.

Kids love to recognize these figures in the rock formations and the “Elefante” is with no doubt a favourite!

As mentioned before, according to the local experts, “Elefante” is the cave of Portugal you can’t miss. 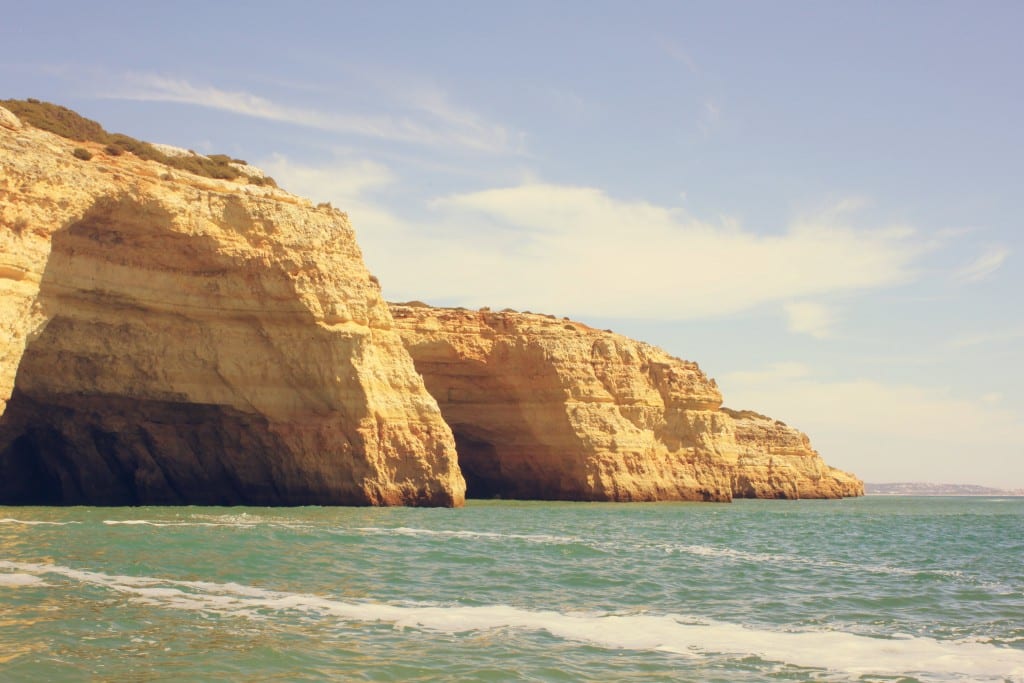 The best holiday with the best cave tours

There are many places where you can take a cave boat tour from, most of the locations have easy and free car park. However, in the summer season, the cave boat trips get very busy, thus book in advance to avoid any disappointments.

In conclusion, there are many more amazing caves, which we would love to share with you. We wish you a beautiful adventure to discover the best sea caves of Algarve, Portugal. If you’ve got any suggestions or questions, please feel free to contact us.