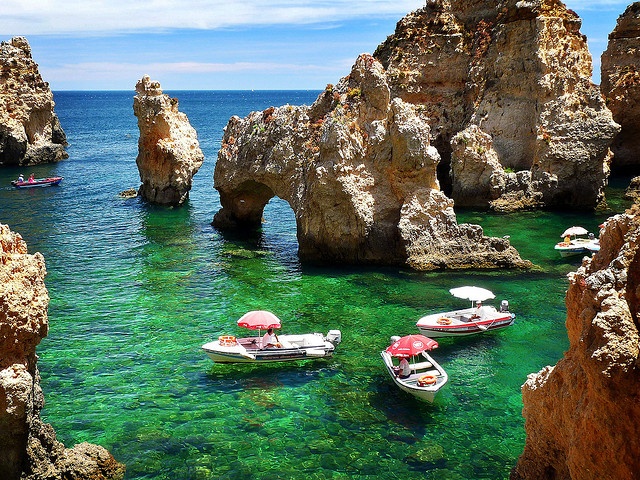 When visiting Lagos, you should go to Ponta da Piedade. This is not actually a beach in the sense that there’s no sand to lay on.

Ponta de Piedade is an idyllic setting of brown shaded rock formations that meet the greenish blue waters of the Atlantic below, being one of the main attractions of Lagos.

Here there are lots of caves, grottoes and arches to go into, as you enjoy a one of the boat trips, row in your kayak or paddle on your stand up paddle surfboard over the crystal-clear water.

he combination of the light brown mysterious cliffs and several shades of green and blue from the ocean and the sky truly enchant the eyes.

Located 2km from the city center of Lagos, this place provides a magnificent view of the Atlantic and the shapes of cliffs carved by the ocean and wind.

There are several ways to explore this mecca of grottos, unknown bays and quiet beaches. You can reach the spot by car, foot or by sea – by boat, kayak or SUP.

In our opinion, Ponta de Piedade is particularly captivating when viewed from the sea.

Near the car park on the cliff tops, you will find long, narrow stairs leading you down to a small cove where you will see cute small fisher boats.

Over time, local fishermen have named some of these misshapen rocks. The most popular ones are the General De Gaulle, Chaminé (chimney), Catedral (cathedral), Belas-Artes (fine arts), Museu (museum), Submarino (submarine), Camelo (camel), Cozinha (kitchen), and Gruta do Amor (grotto of love).

For nature lovers, this natural paradise is also interesting due to the many bird species that make it their habitat.

If you are interested in knowing more about the history of Ponta da Piedade. This was the place to control and defend the city many years ago.

A few meters away from the coastline, there are several rock formations on which it is common to see nests of migrating falcons, jackdaws, alpine swifts, pallid swifts, and ravens, as well as groups of egrets and cattle egrets.

This is a must place to go for nature lovers and also photographers since the beautiful colours of the setting make a perfect postcard portrait.

For the most sporty ones and if you dare climbing up 182 steps to the top of the lighthouse, you’ll will have a view over the amazing city and coastline, which marks the limit between land and sea. This lighthouse can also be reached by car or foot.

Ponta de Piedade is located out of the city center. If, for some reason, you prefer not to walk 20minutes and if you have a car, the best way is to park your car near the lighthouse. Parking here is for free.

From the parking lot, you can appreciate the views over the Atlantic or if you prefer and dare, you can go down the stairs (bear in mind it are over 180 steps) closer to the Ocean.

In our opinion, to go by car should be your last choice since there are more creative ways that allow a deeper enjoyment of this amazing creation of Nature.

From the city center of Lagos to the lighthouse (farol)  it’s a 2km walk, but a beautiful one. You’ll pass along the coastline of Lagos and come along some very nice beaches.

At Praia do Camilo, you can have great meals of freshly caught fish, grilled at the moment and a special selection of Portuguese wines.

Amazing views over the colorful cliffs are guaranteed, but be aware that, especially after raining the cliffs might be instable, so respect the signs and do not approach the end of the cliffs too much.

Another thing to bear in mind is that this 2km walk is quite hard, because it has got some hill and can become hot, so bring some water, sunscreen and a hat.

Once you arrived at the lighthouse of Ponta da Piedade, and if you’ve still got some energy left, you can go down the stairs (bear in mind it are over 180 steps) closer to the Ocean.

The boat trips are probably the most popular way to visit this gem in Lagos. The cave tours are the most popular tours in Lagos and depart from several places, from some beaches and the Marina of Lagos.

The boat trips are an inexpensive and nice way to enjoy the amazing caves and coastline of Lagos with your family and friends. Prices per person start at only 20€.

On these cave boat trips, experienced fishermen wind their way through the colossal rock sculptures whilst telling their names and secrets.

Along time, local fishermen have named some of these rock formations. The most popular ones are Chaminé (chimney), Catedral (cathedral), and Gruta dos Amores (grotto of love). The fishermen on your boat, will be happy to tell you all of them.

On SeaBookings.com, you can find the best online prices and several options:

From Lagos, there are many diferente boat tours, including dolphin watching, BBQ cruises, Private charters and more.

For the most sporty couples or families, kayaking is the ideal way to explore the magical setting of caves.

The Lagos kayak tours to Ponta da Piedade depart from Praia da Batata, the “urban” beach of Lagos, only a five minutes walk from the city center.

Kayaking to Ponta da Piedade has several advantages when compared to the traditional boats:

Snorkel equipment will also be provided on the kayak tours, so if you’re up to explore the underwater world of Ponta da Piedade too, you’re welcome to do so.

You won’t regret it as Ponta da Piedade is one of the best places in the Algarve to go snorkeling.

SUP tours to the caves

An alternative for the sportiest travelers is Stand Up Paddle (SUP). This is the ideal way to discover the famous grottoes for board lovers.

SUP consists of standing on a large surfboard and moving forward using a specially designed paddle. This sport is easy to learn.

We’re sure this is the most amazing and fun activity to do while exploring the caves. In fact, SUP has the same advantages as kayaking, mentioned before.

Learn the ancient Polynesian art of Paddleboarding. SUP is the world’s fastest-growing sport that anyone can partake in. In fact, SUP is suitable for all ages and levels of experience.

If you’ve got other ideas or suggestions to explore Ponta da Piedade, feel free to contact us.

In case of any doubts or if you’d like to book any of the ocean activities mentioned, we’re happy to assist you. 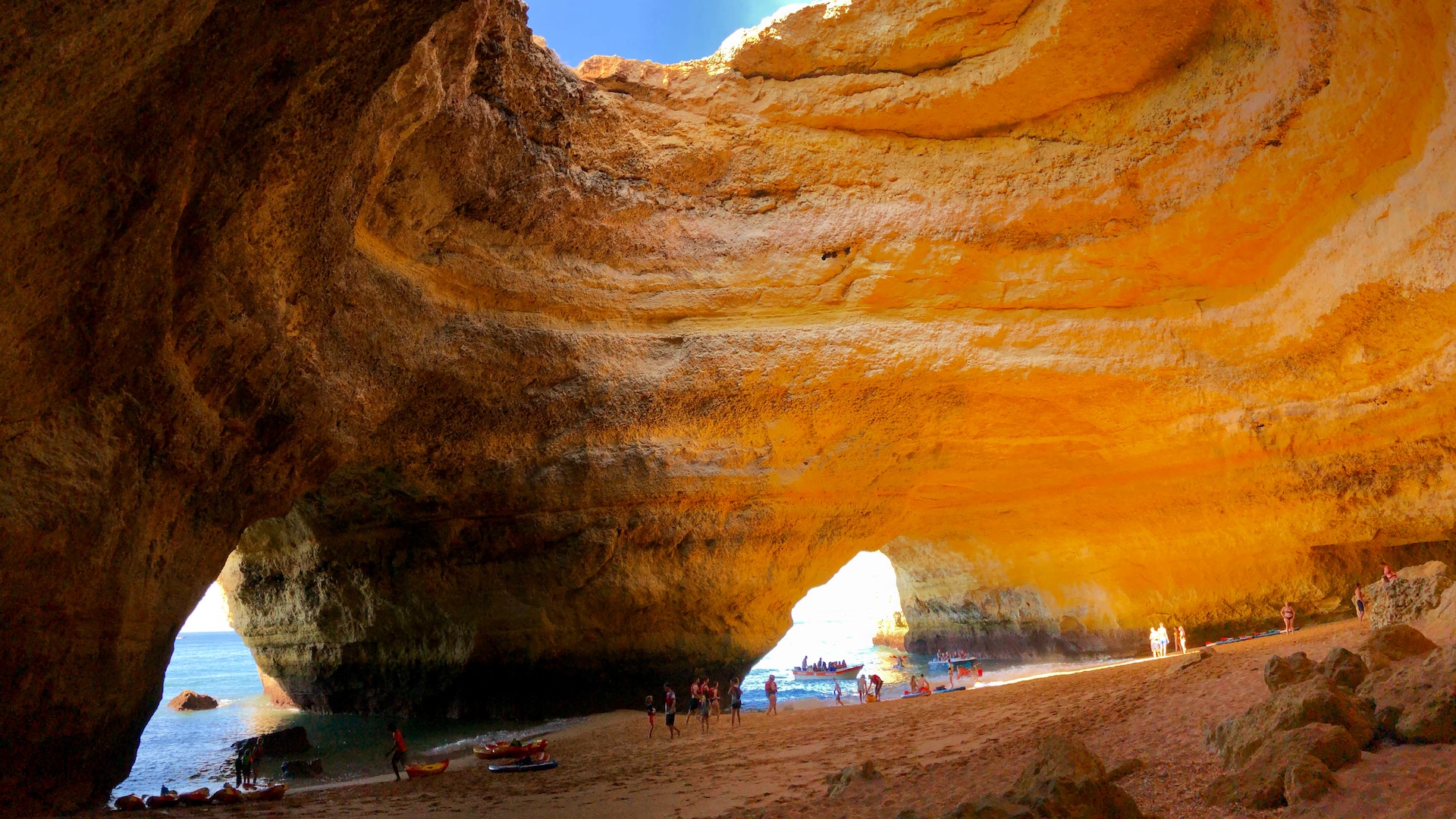 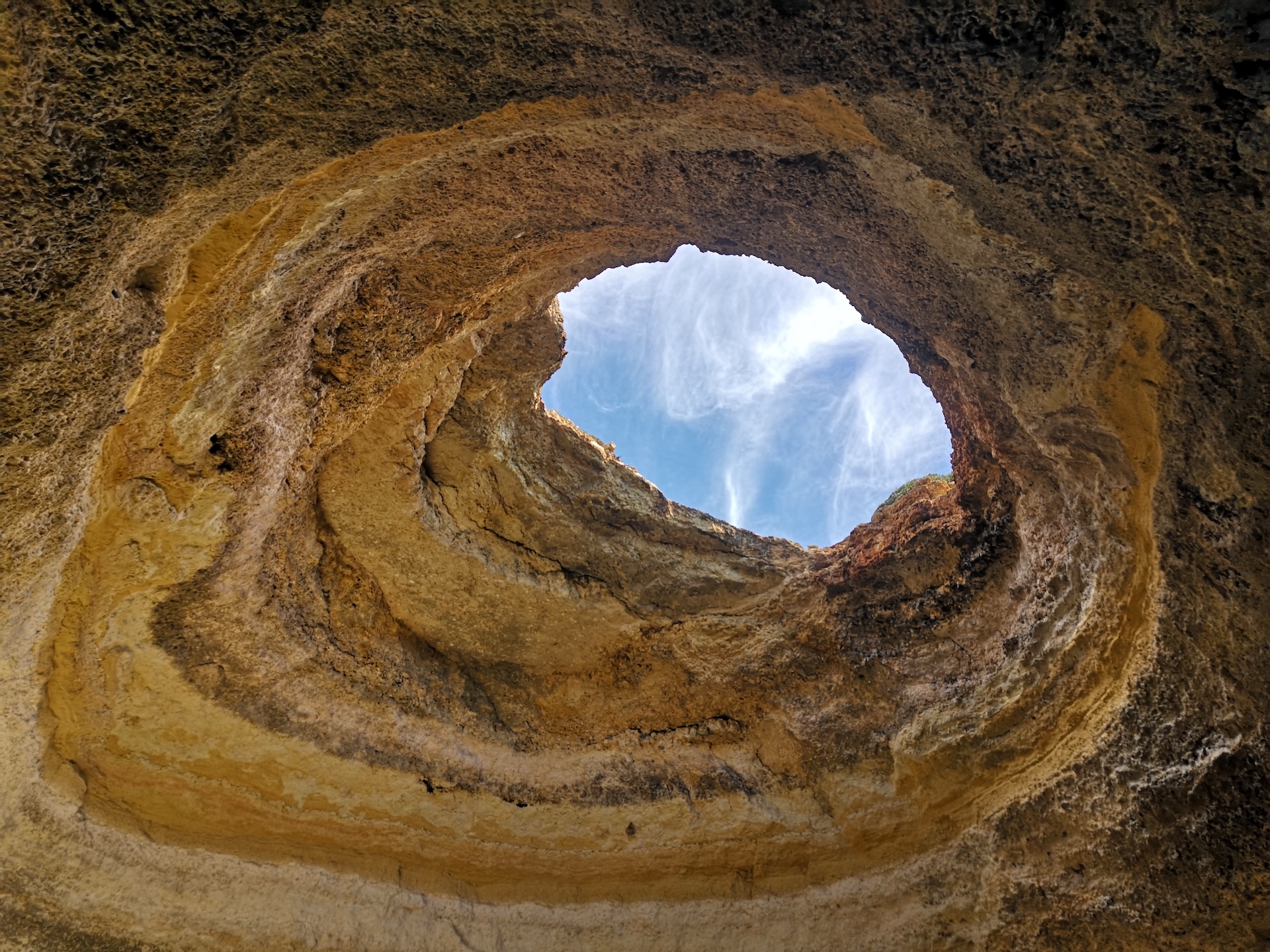 How to get from Faro to Benagil cave 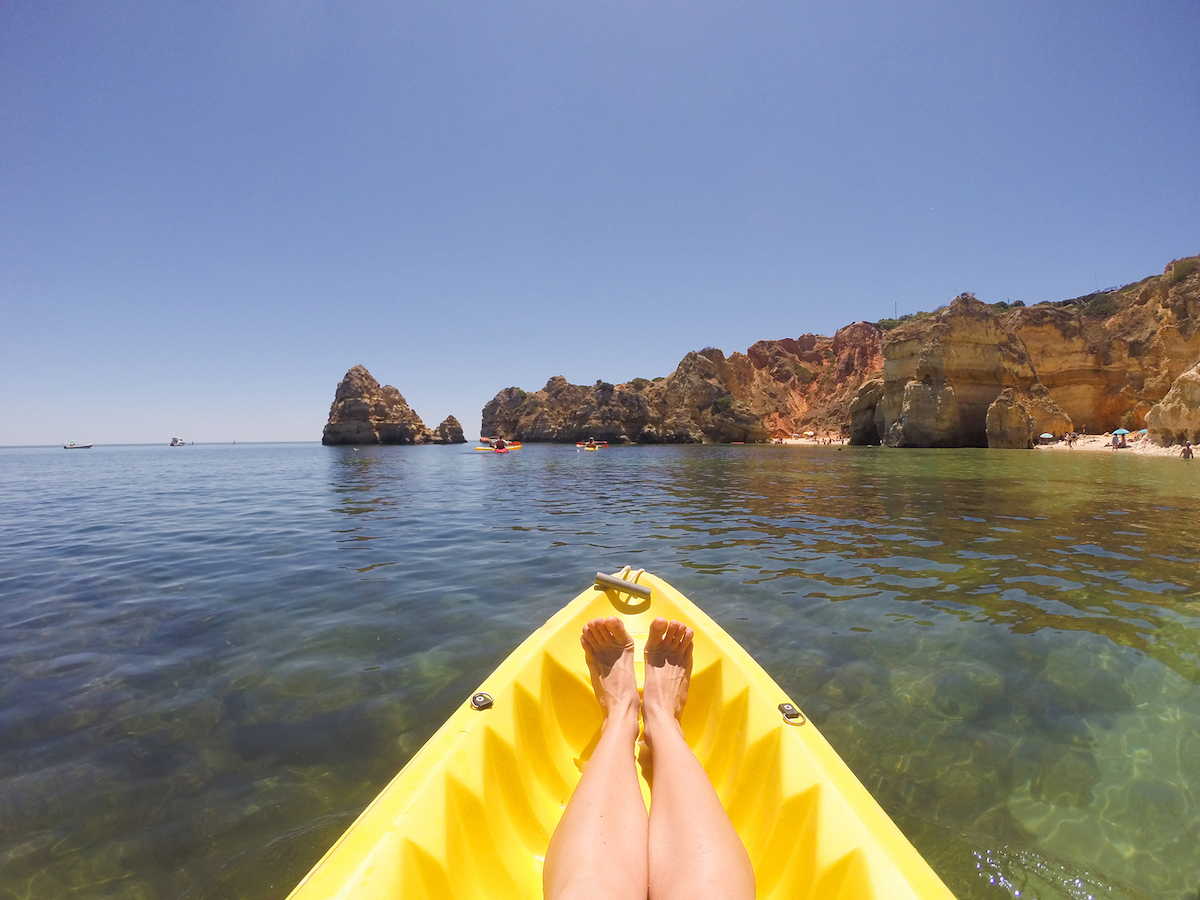 Please visit the Algarve. Now! For you and us.