Tips for your holidays in Tenerife

Tenerife is one of the seven islands of the Canaries. The island group is part of Spain and located in the middle of the Atlantic, next to the Sahara. We went with part of our team on holidays in Tenerife to get to know this island where we now also provide some great sea tours. While “testing” some of our partners’ activities around Tenerife, we got to learn a lot of “inside” information about the island. 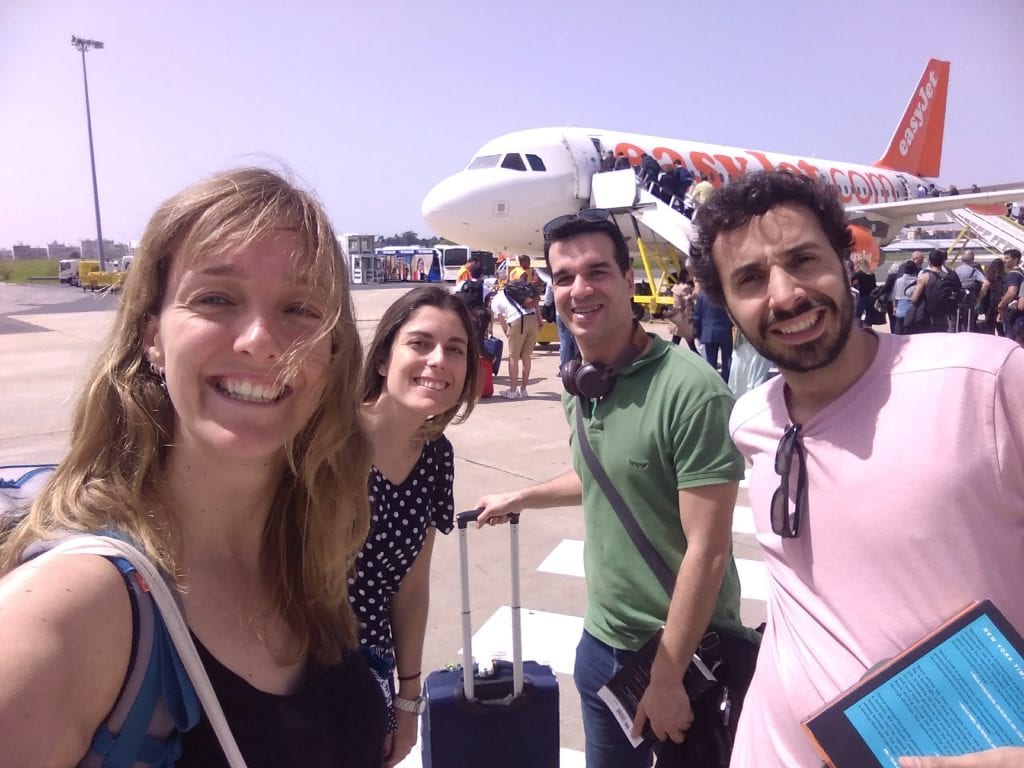 We flew from Lisbon to Madrid and from there to Tenerife

1. Flights for your holidays in Tenerife

From the main cities in Europe, you can find direct flights to Tenerife. Tenerife has two airports, Tenerife North or South. Choosing which airports depends a bit on where you’re planning to stay but actually, they’re not far away from each other, about 90 minutes by car.

We flew from Lisbon to Madrid (about one hour) with Easyjet and then from Madrid to Tenerife North (about 2,5 hours) with Ryanair. The total cost of this return flight was about 100€ per person at the end of April. We decided to also spend a night (one before and one after) in Madrid to also enjoy this city and make the journey feel “lighter”. 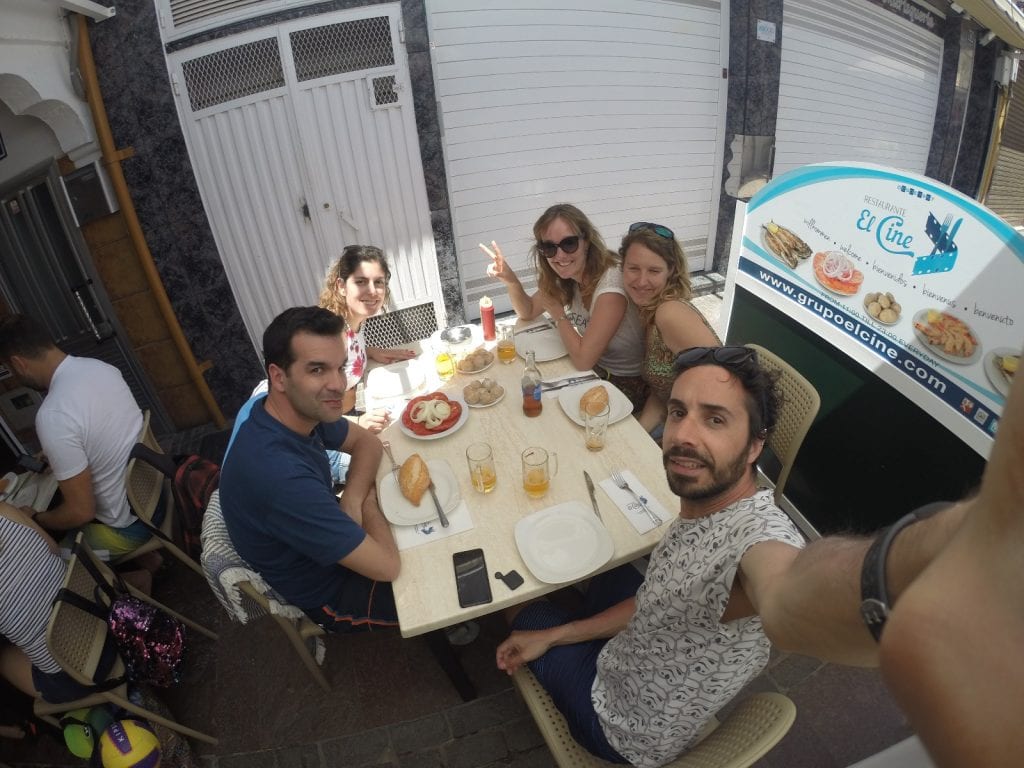 At some more local places, paying by card can be difficult

On the Canaries, Spanish is the official language. Not everybody speaks English but in the more touristic places, you’ll find a lot of English speakers.

The local currency is the Euro, like in Spain mainland. At most places, you can pay by card and you’ll also find a lot of ATMs around the island. 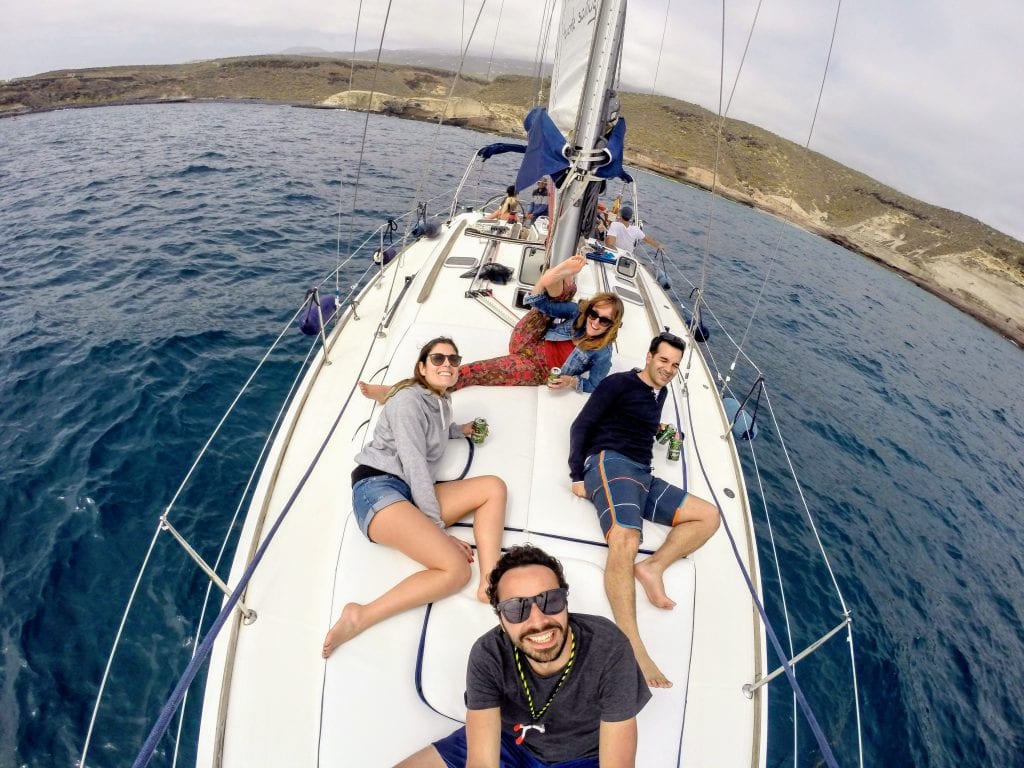 We went in April and had great weather

3. When to go on holidays in Tenerife

We decided to go on holidays in Tenerife at the end of April. For us, this timing was perfect. In fact, it was low season, right in between the busy seasons of Easter and Summer. We loved the empty beaches, calm roads and no queues at restaurants. We also loved this time of the year because nature is just stunning in Spring, especially in the jungly North part of the island. In addition to that, the weather was just fine. It was partially clouded in the North and sunnier in the South with temperatures around 25 degrees Celsius during the day.

During the Winter season, November to March, it gets quite busy at Tenerife with European tourists escaping the winter in central and Northern Europe. Then come the Easter holidays and then it gets busy again during the Summer, from June to September. In Summer, temperatures rise a lot and may become too hot for some people. If you like the feeling of a busy holiday destination and a wild party scene, Summer is ideal for you. If you prefer calmer holidays in Tenerife and want to enjoy nature, we recommend going off-season. 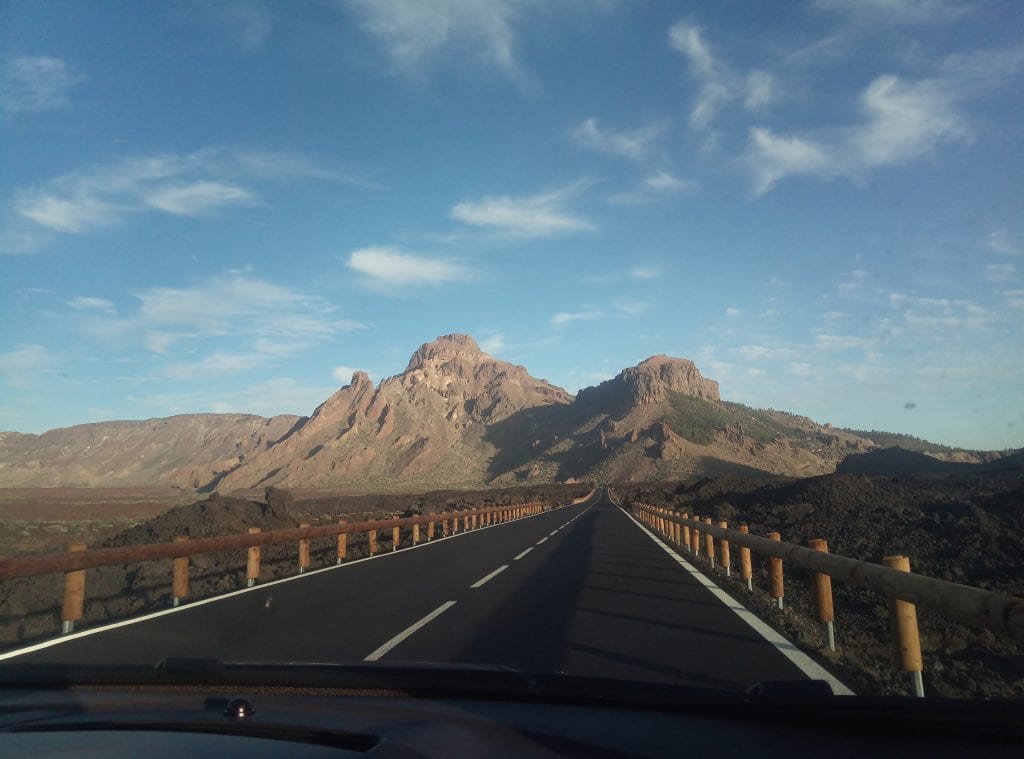 By car, you’re most flexible

3. Getting around in Tenerife

Tenerife is too big to do by foot or bike (at least for most of us). As there are no train and bus connections are not the best, we recommend to rent a car. We rented a car from Hertz and it was perfect. We easily picked it up at the airport and dropped it off at the end of our holidays. The cost was 80€ for 3 days and we spent 30€ in fuel. Fuel is rather cheap on the island, we paid less than 1€ per litre.

The roads around Tenerife are amazing. They’re all very new and safe, even at the most remote places like in the Anaga Mountains. Easiest to get around is by using a GPS or Google Maps. After 3 days, we did not even need it anymore to get to the airport as we already knew how to get around. 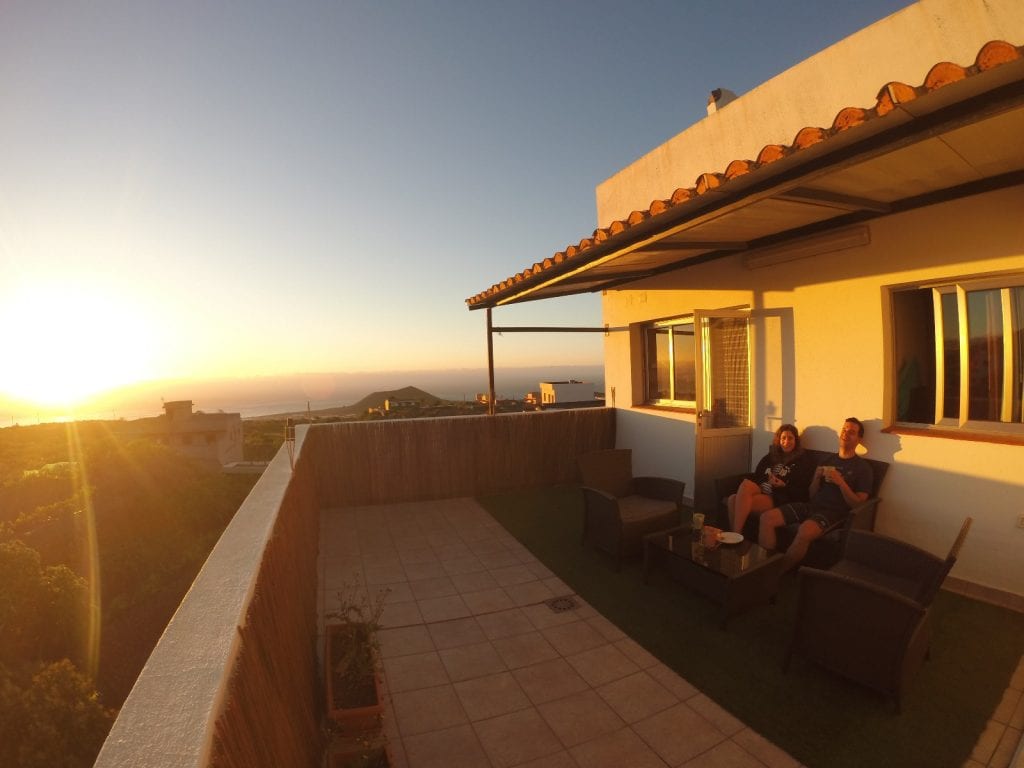 Our lovely home in Guimar

4. Where to stay during your holidays in Tenerife

Most people that go on holidays in Tenerife stay in the South part of the island. As we were looking for a more local experience, we decided to look for something else rather than the big hotels. We used airBnB and as we were 5, we found a very nice 3 room apartment in Guimar. Guimar is a local town in between the North Airport and the Southern one. As we had a car and were planning to explore different parts of the island, Guimar was just fine. But as locals say, Guimar is in the middle of nowhere and nothing happens there. We loved the apartment and its location and would recommend it you if you’re travelling with a similar mindset to ours. 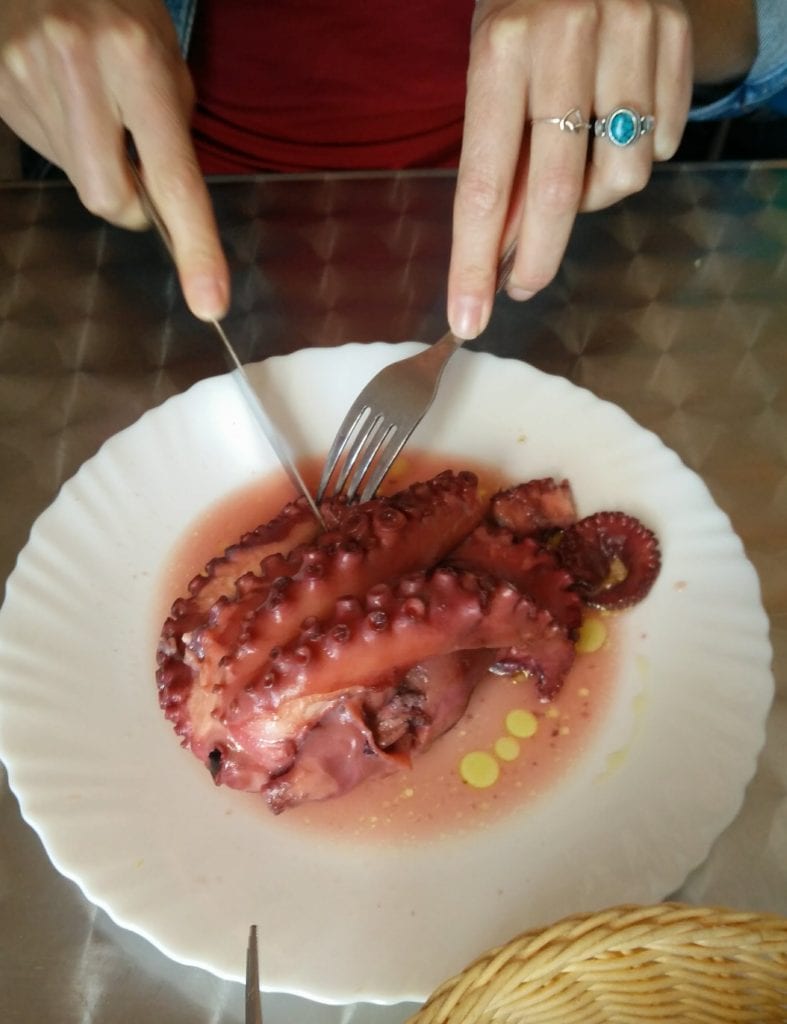 Officially the best octopus ever!

5. What to eat in Tenerife

Seafood and fish! On an island, of course, you should eat what’s “given” by the sea. Bananas are also a much as the island is full of the banana plantations. We had a great culinary experience on the island. As such, we decided to share our food experience in a post about the best local restaurants in Tenerife. 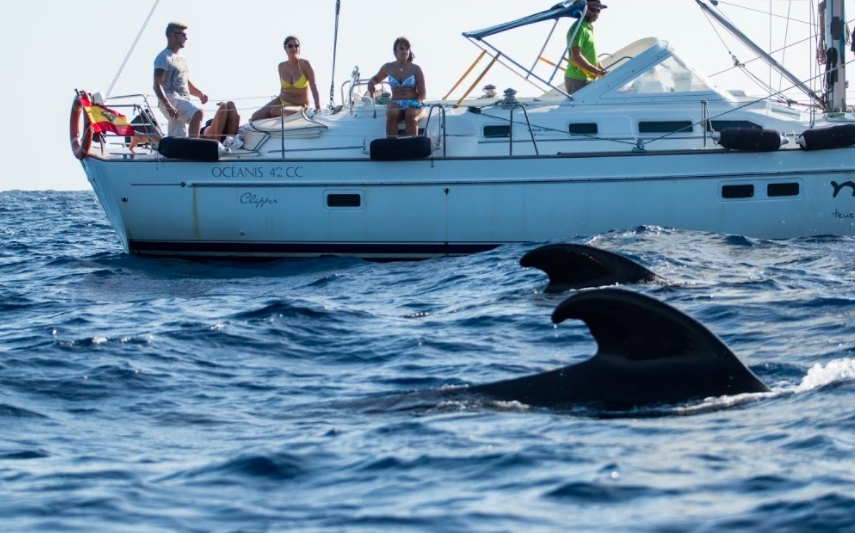 6. Things to do in Tenerife

Beside sea tours, Tenerife has many things to do. It ’s a true paradise for outdoor activity lovers! Our colleague Nathalie already wrote a nice article about the best things to do in Tenerife. In fact, most of the things we did while visiting this wonderful island are already listed there. You can find our personal experiences here.

We hope you have an amazing holiday in this natural paradise, also known as Tenerife! If you have any questions or recommendations, feel free to contact us!