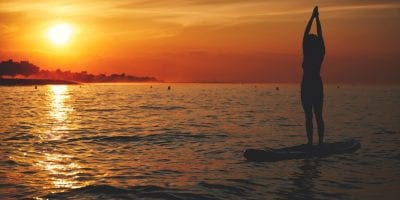 SUP is a very beginner-friendly sport and was born in the 1940s when Waikiki surfers stood on boards and started to navigate through the waves using a long paddle. On the other hand, yoga which originated in Rishikesh, India, is a thousand years old practice.

Paddle Board Yoga in Portugal is becoming more and more popular. The sport is a perfect combination of nature appreciation and physical and mental exercise and Portugal provides the perfect sport to practice it. 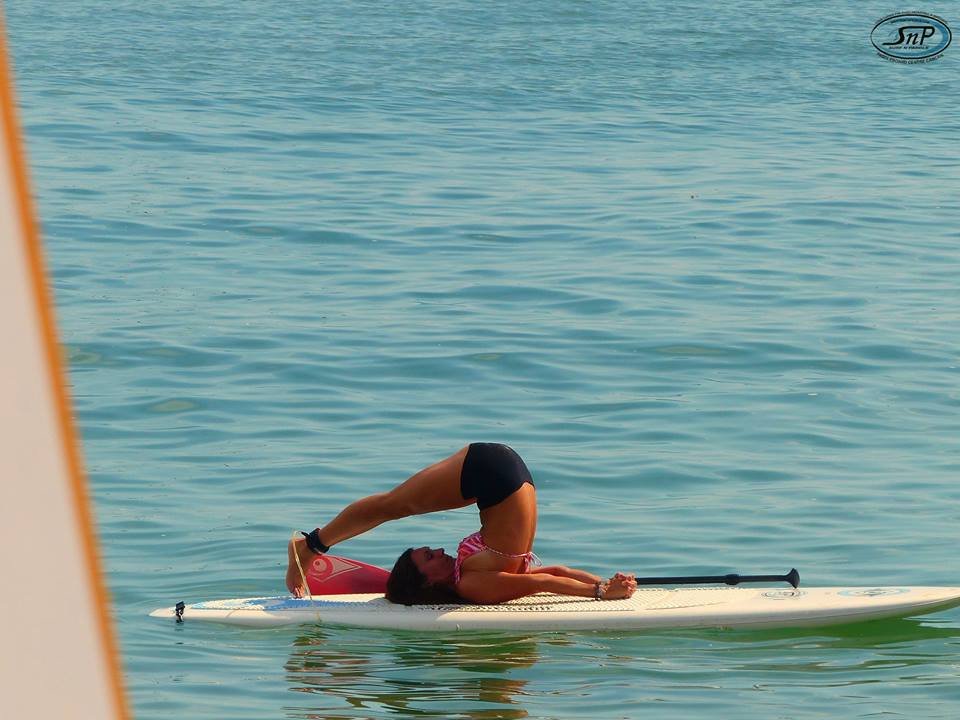 For who is SUP Yoga in Portugal?

Paddle Board Yoga is suitable for all ages and all levels of experience. SUP is a very beginner-friendly sport as a half an hour introduction lesson will be enough for you to manoeuvre the board to practice Paddle Board Yoga.

Paddle Board Yoga, in terms of the yoga, is also indicated for different levels of experience as the asanas (postures) will be adapted according to the level of the group.

As such, the Paddle Board Yoga session would be suitable for both beginner yogis who are exploring this practice for the first time as well as more experienced yogis and yoginis. 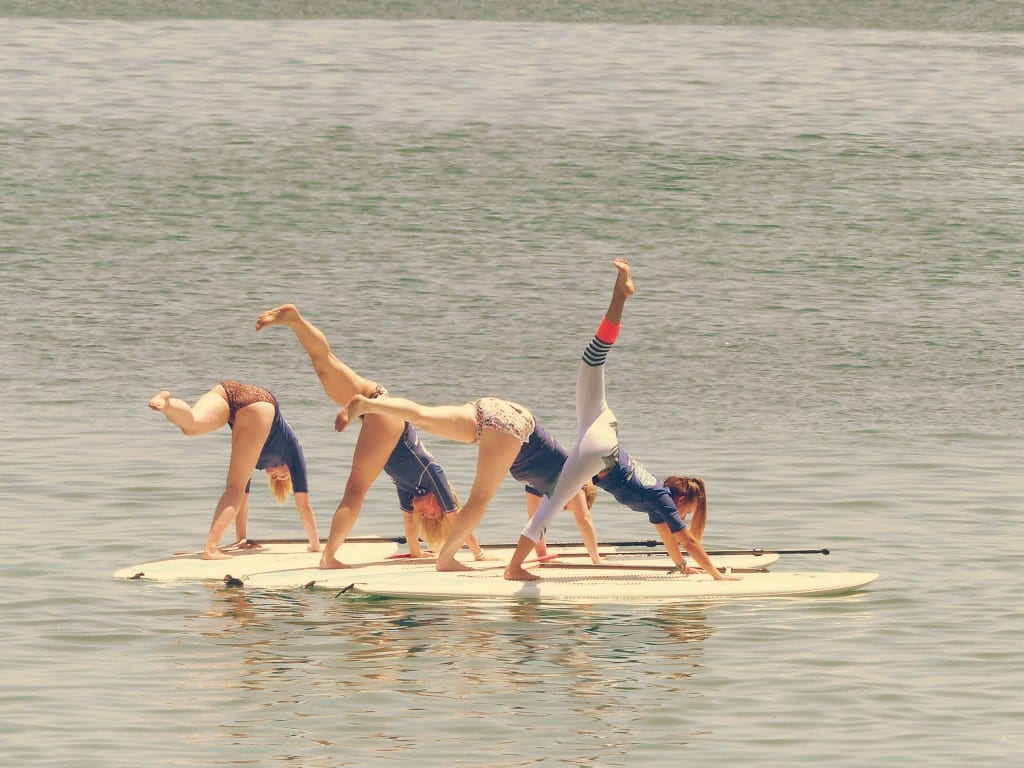 Where can you do SUP Yoga in Portugal??

SUP yoga in Portugal is practiced in the most serene of settings: an idyllic ocean bay, a glassy and quiet lake, even a slow-moving river. Paddle Board Yoga in Portugal is very popular in Cascais a peaceful fishermen village about half an hour away from Lisbon.

Cascais has stunning beaches where white sand meets the crystal clear water of the Atlantic. The variety of bays allows you to have a nice and quiet bay all year around.

According to the weather and ocean conditions, the most suitable bay will be chosen to guarantee a joyful SUP yoga in Cascais. In Cascais Bay it’s always possible to find calm water. 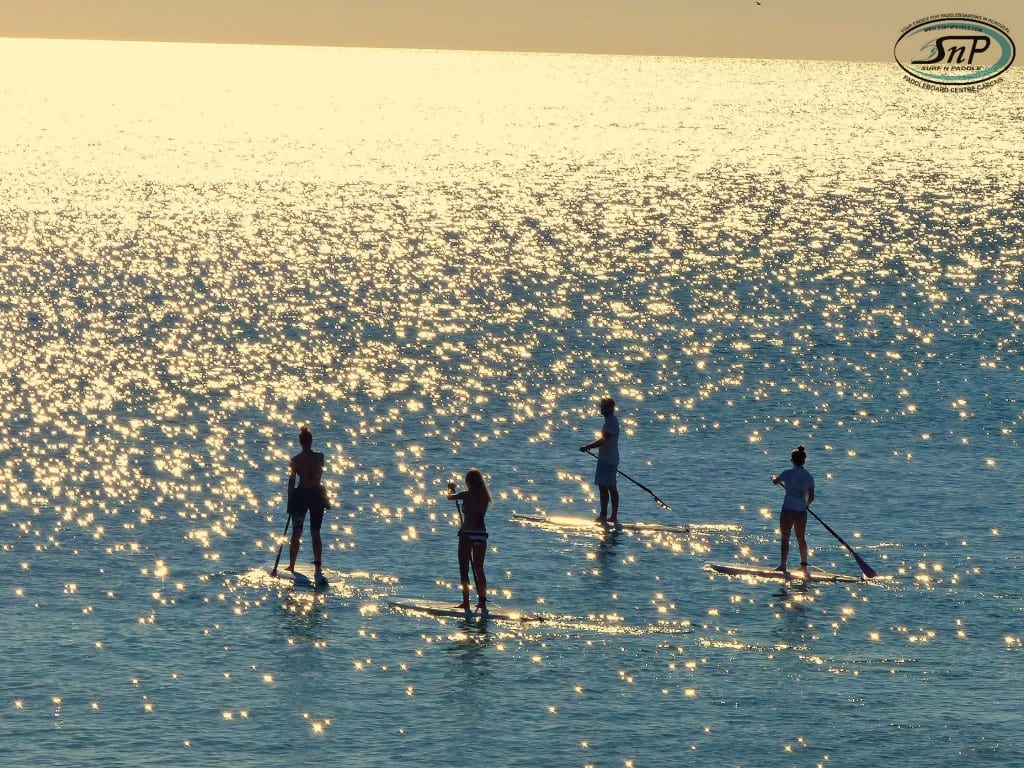 SUP Yoga in Cascais is a practice designed by Ana Macedo, a 33-year-old Yogini traveller, adventurous, artistic and nature lover. Ana is a yoga teacher, as well as student.

As her Yoga principles and beliefs deepened over the years she decided to do more specialised courses although she claims her students to be her best teachers.

As she presently lives in Cascais, she decided to join her passion for yoga and the ocean and became a devotee of Paddle Board Yoga. Ana’s specialty are Hatha Yoga classes, but also enjoys going further into other yoga areas and experiences.

To Ana, SUP yoga is a practice of meditation, asana (physical postures) and Yoga Nidra (relaxation). Bringing these practices together incorporate a new way to do Yoga sitting, standing or lying on a SUP Paddleboard.

Ana’s SUP Yoga sessions in Cascais give the opportunity to develop a greater presence, more focus and remarkable body awareness, all in perfect harmony with the elements around us. And, it’s fun! 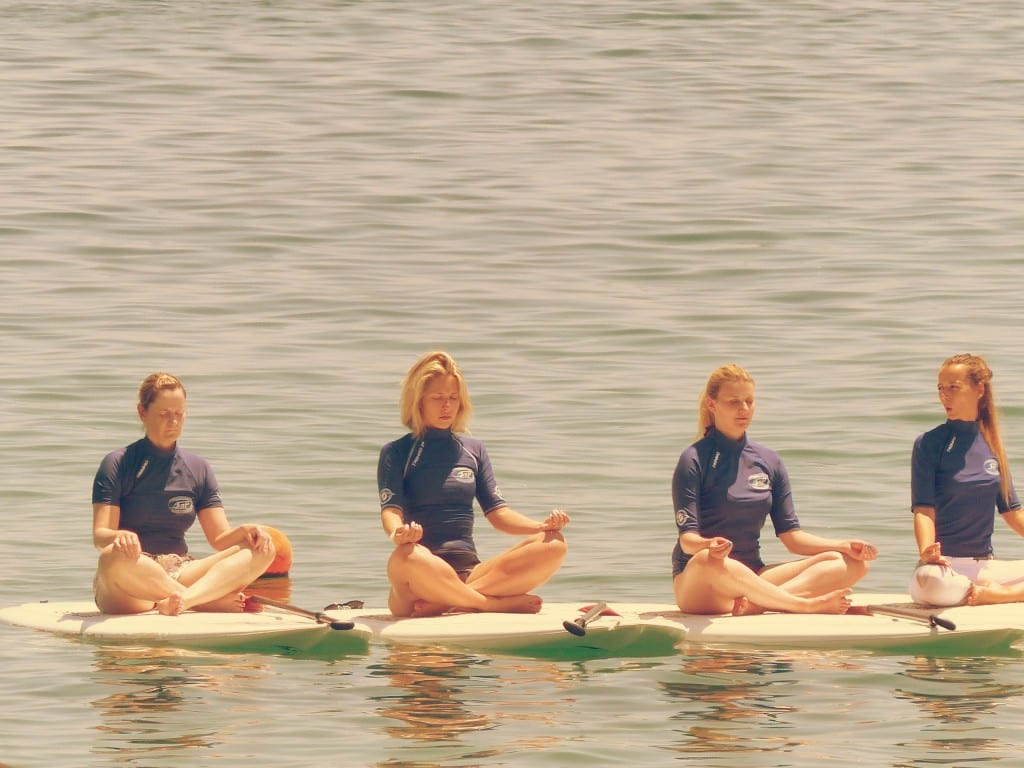 Benefits of Paddle Board Yoga in Portugal:

Does this combination of nature, physical and mental exercise sound good to you?

Please don’t hesitate to contact us for more details or feel free to book your SUP yoga experience in Cascais now! 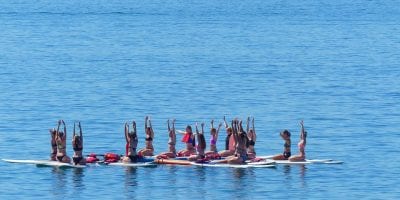 We went to try out SUP and SUP Yoga in Cascais 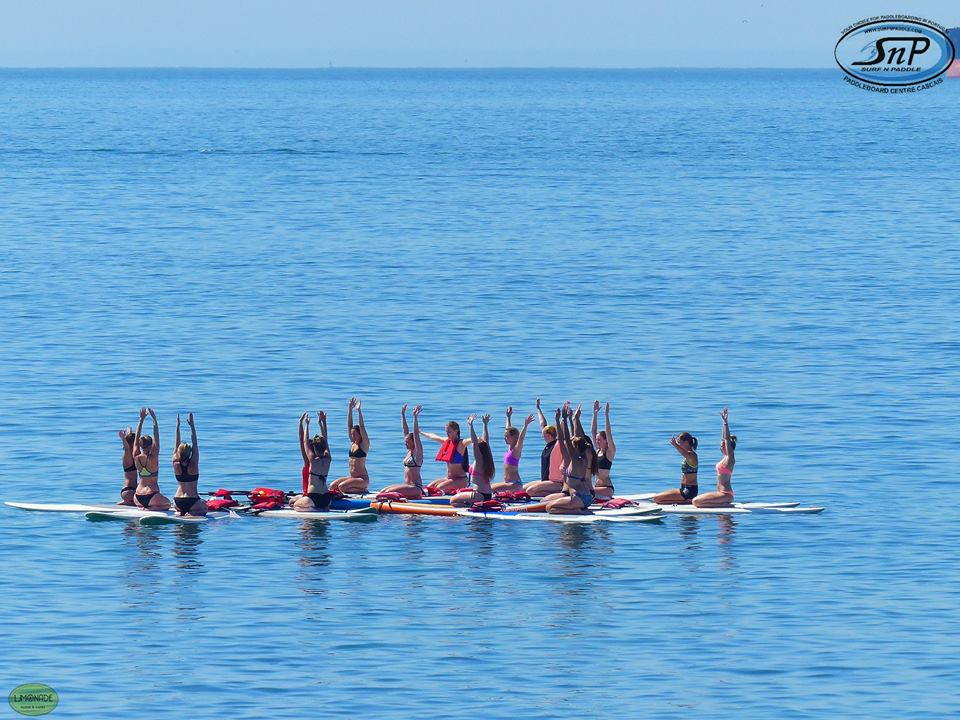 Last week I joined a group of friends and woke up early to head to Cascais. It was worth waking up early as the sun and quiet ocean were inviting us for a relaxing stand-up paddle boarding session with a tour and SUP yoga in Cascais.

Stand-up paddleboarding, or SUP, is a fast growing sport. There are several reasons why SUP is gaining more and more fans. One of the main reasons is that SUP is very easy to learn. In fact, after a quick beach class of about 15 minutes, you’re ready to get into the water. In addition, SUP is suitable for all ages and does not require any previous experience. All SUP requires is love for the ocean and willing to workout a bit!

After hearing all these nice stories about SUP, we decided to try it out ourselves. Nick, from the SUP school in Cascais, welcomed us as soon as we got to the stunning beach of Cascais. Praia da Duquesa is the beach where the SUP school is located. It’s a very idyllic beach as it’s very cozy, surrounded by the characteristic noble buildings. The waters around Cascais are light blue and the temperature does not show it’s the Atlantic. 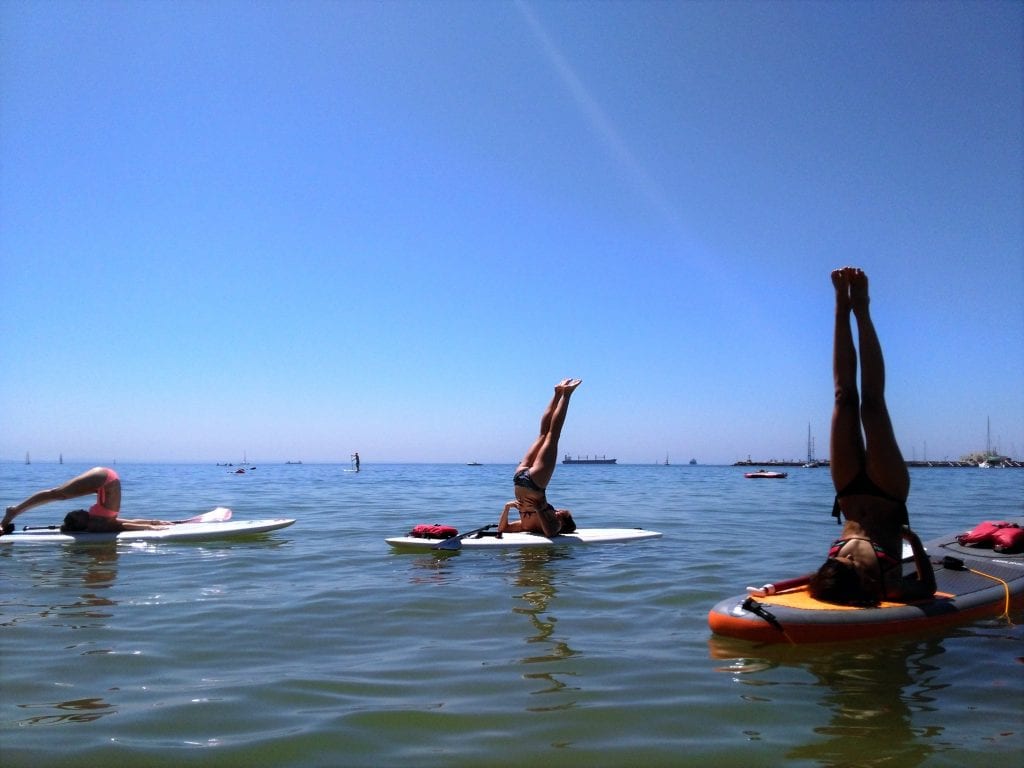 After choosing the right life jacket, board and paddle according to our sizes, we went to the the beach to practice in the sand. Lia was the girl who was in charge of our SUP session. She started to explain how we should get on the boards, how to lie on them, how to get up to your knees and stand up. It’s also important to understand how to use the paddle correctly. After showing us some tips and sticks, we were ready to get into the water.

The water felt nice, rather fresh, but not as freezing as you’d expect the Atlantic to be. No wetsuit was needed, only a swimsuit and a life vest. As you reach a depth to your knees, you can easily get on your board, on your knees and start rowing. There was no wind at all and the water was crystal clear. We could even see some fishes and rocks. 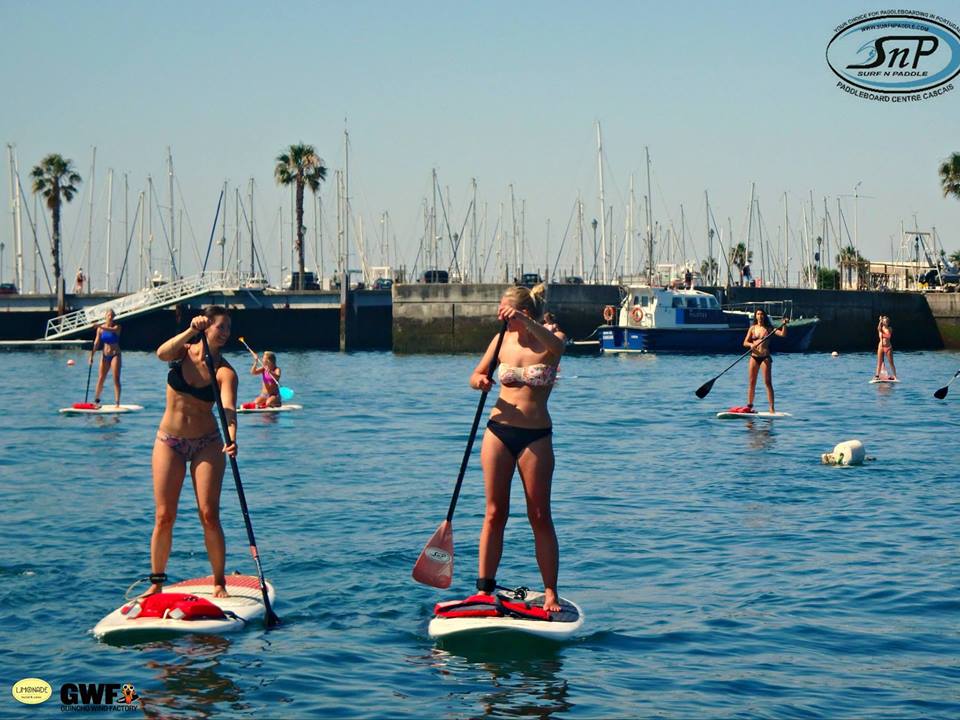 The first part of the SUP session consisted on a tour. We went for a nice tour along some of the beaches of Cascais and the marina. I’m not sure how long the tour took, maybe half an hour, but as I was enjoying so much, I lost track of time. During the SUP tour in Cascais, you could choose if you wanted to stay seated on your knees or stand up. I prefer to stand up as it gives a nice view over the coastline. SUP in Cascais is wonderful to get to know the coastline of Cascais but also to workout. In fact, while sitting on your knees or standing on your board, you’re working out your whole body, from your toes to hands!

It was nice to paddle through the boats and say “hi” to the people who were on them. The view of the group of girls standing on their boards while paddling over the water was also amazing. We did a kind of round and got back to near the SUP school. 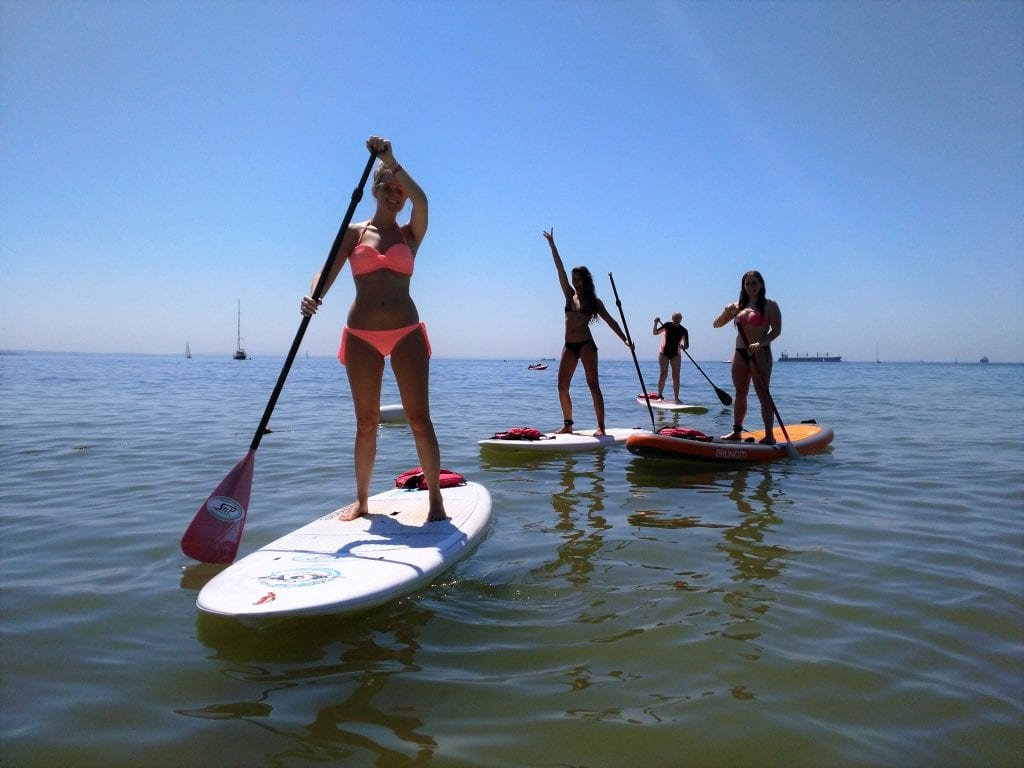 When we all had reached the meeting point in front of Praia da Duquesa, Lia tied all our leashes (leash is the rope that attached your foot to the board) to a buoy. The buoy was there, anchored, such that we could attach our boards to it to stay on the same place for the SUP yoga in Cascais.

Lia had prepared a very nice yoga sequence for us. Some postures were thought to be easier and low-gravity to be able to perform them on the SUP board. Other postures were a bit more challenging and only some of us managed to do them.

Personally, I must admit that the SUP yoga in Cascais was easier than I thought. Of course I did not manage to do some of the more challenging postures, but others I did fine. I practice yoga frequently so I was really looking forward to join yoga, that I love, to another passion: the ocean. SUP yoga in Cascais totally exceeded my expectations. Doing yoga outside and feeling the sun on your skin is amazing. Now, imagine this plus feeling the ocean, the ocean’s water and movement. It’s amazing. When we finished the SUP Yoga, I just said: can we do this everyday, please?

I recommend the SUP in Cascais for everybody who likes the sea. It’s a great sport to do with a group of friends. Nick and his team will welcome you and give you a great experience. I’ll be back soon, that’s for sure!

All you need to do SUP in Cascais is to bring is a swimsuit (for the girls, you might want to bring some shorts, but we didn’t), sunscreen, a towel and some water and a snack. After the SUP session, you can grab a beer at the bar next to the SUP school. Here, a beer only costs 1,10€. To get to Cascais, you can drive from Lisbon, about 30 minutes over the A5 motorway. You can also go by train, a very nice route along the coastline, from Cais do Sodre. The train takes about 40 minutes and costs about 2€.

Let us know if you’d like to try some SUP in Cascais, a tour or a yoga session. If you’ve got any suggestions or questions, let us know too.