Holiday Tips for the Algarve

How to get into Benagil Cave

Do you want to know how to get into Benagil cave? You can walk, swim, or join a boat, kayak or SUP Tour.

The Benagil cave is probably the most famous sea cave in Portugal. So if you are on holidays in the Algarve, make sure you visit it! The region around Benagil is also worth a visit, so why not combine it with a tour along the Algarve coastline or a day trip to the nearby village Carvoeiro?

What is the Benagil cave?

The Benagil cave is a fascinating rock formation with a big eye in the middle. It’s the most famous sea cave in the Algarve.

The hole in the ceiling of the cave allows the sun to shine at the little beach inside the cave. Its beauty is hard to describe and the best way to understand it is to go there and see for yourselves! The colours of the cave are, just like the entire coastline around it, unique and typical for the Algarve. And to see the clear blue sky through the eye of the cave is simply beautiful! 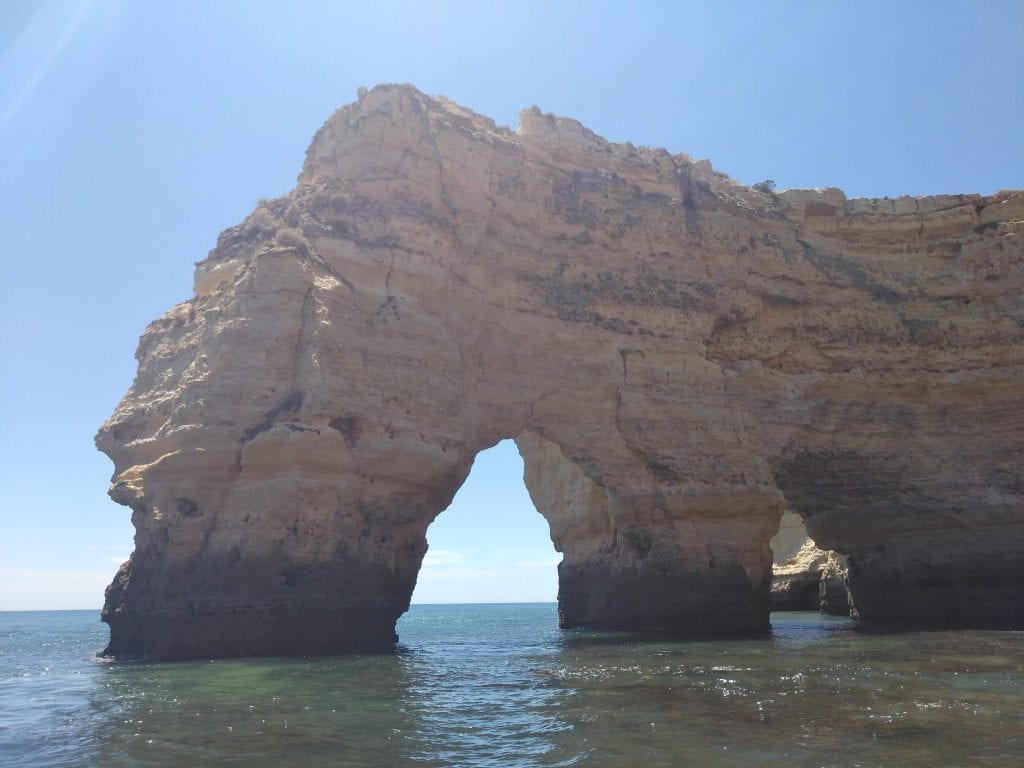 The arches of Marinha are very impressive too

Where is the cave?

The Benagil cave is located in Lagoa, in the Algarve in Portugal. The grotto can be found just between Praia do Benagil and Praia da Marinha.

Close to cave, there are also some other towns that are worth a visit. Carvoeiro is one of the most popular destinations in the Algarve for tourists from all over the world. Here you can stroll around the streets, enjoy an ice cream or a nice lunch or dinner after visiting the cave!

How to get to the Benagil cave?

To get to the Benagil cave, you can go by train, bus or car to any of the departure points of the Benagil tours. The Benagil cave tours depart from Albufeira, Portimão, Lagos, Vilamoura, Armação de Pêra, Ferragudo, or Alvor.

To go to the beach, next to the small fishing village, the easiest way is to drive there by car. If you want to go to the beach by public transport, you need to go by train or bus to Lagoa. From there you can get a taxi, which costs about 10€ to Benagil. 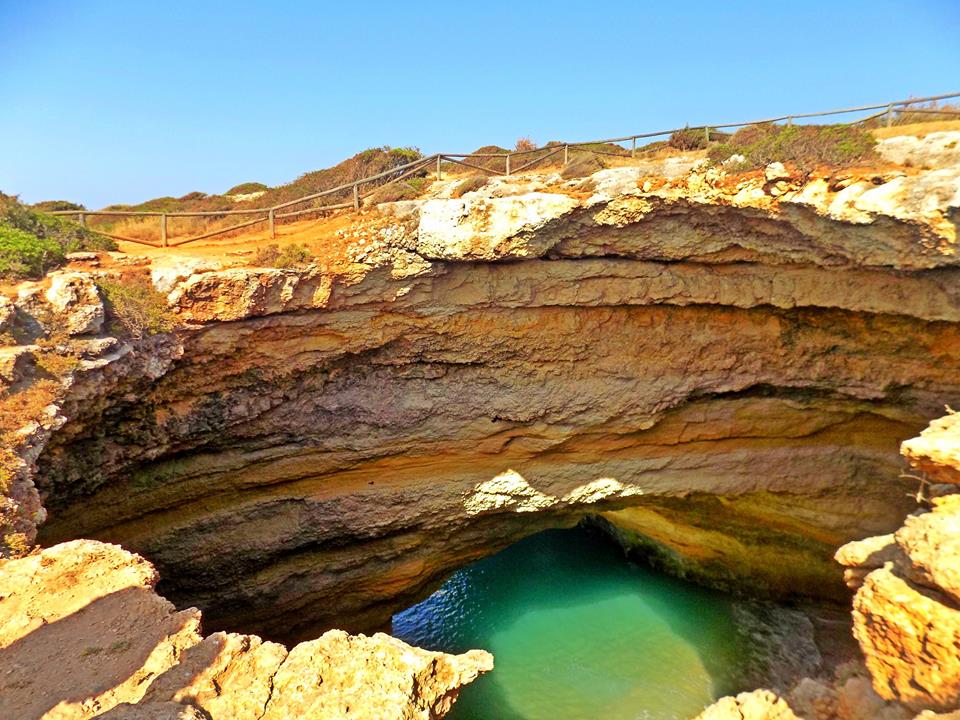 Can you walk to the cave?

Yes, you can walk to Benagil cave. However, this way you can only see the beach and cave from above. It’s also very beautiful. But seeing the famous cave from the cliffs is not nearly as impressive as seeing it from the sea. So even though you can walk there, it’s not the “real”  experience. And of course, you won’t get to take those amazing pictures.

Can you swim to the cave?

Yes, you can swim to the Benagil cave, but it’s very dangerous. Benagil is one of the most popular caves in the Algarve. There are many boats going in and out of the cave at the same time, especially at high season. Unfortunately, swimmers can be overseen.

The sea conditions can make it very risky to swim to the cave. So while some bloggers suggest the best way to get to the cave is by swimming, let us tell you that this is very dangerous. Especially people who are not familiar with the sea and not very good swimmers should definitely not swim. 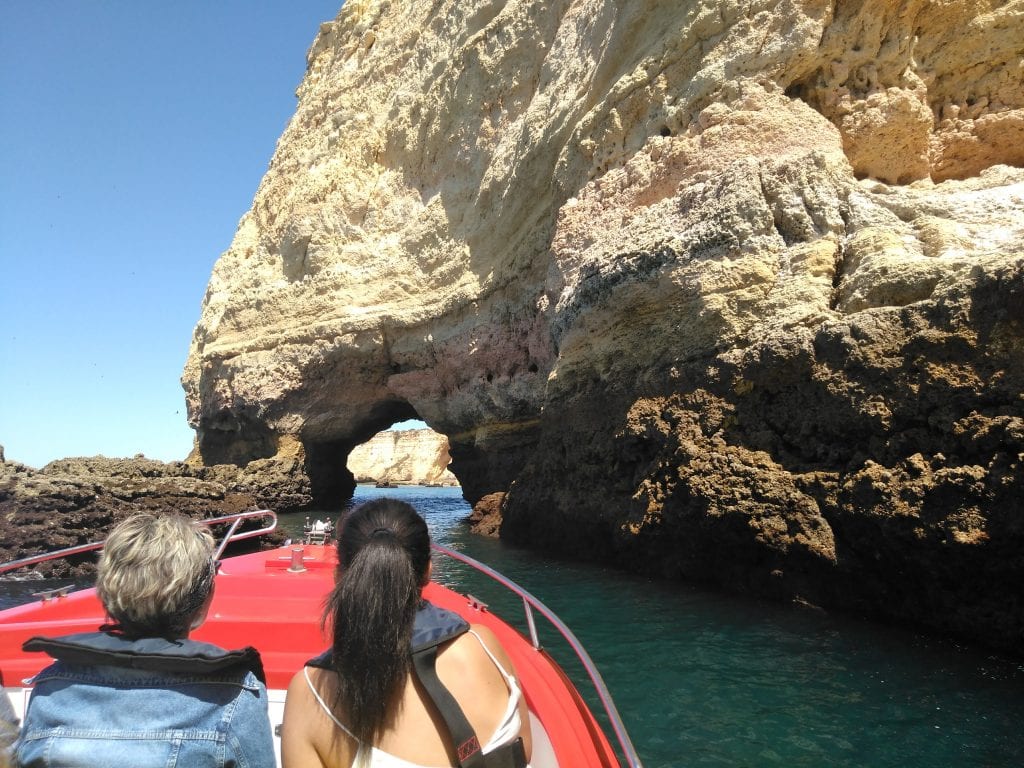 On a boat ride along the coast, you get to see many caves

What is the best way to see Benagil cave?

The best way to see Benagil cave is by boat, kayak or SUP. This way you can get into the Benagil cave ad actually stand on the sand in the cave.

If you want to visit Benagil without too much effort, the best way is on a boat tour. People who are not comfortable in the sea can feel safe in a boat. All boat tours include life jackets.  More active people might prefer a Kayak or SUP tour to Benagil. The advantage is that with kayak or SUP, you can get really inside the Benagil cave beach.

But why only visit Benagil sea cave?

Did you know that the entire region around it is full of similar caves, and all of them a lot less frequented by tourists? Sure, the cave is very impressive and a famous tourist attraction of the Algarve, but actually the caves in the entire Algarve coast around it are equally beautiful! There are also many beautiful beaches.

If you get on a boat trip from Lagos, Portimão or Ferragudo for example, you will see about 15-20 caves before actually arriving to Benagil. Depending on the tides, your skipper will take you through tunnels and into completely dark caves. By the time you get to the sea cave, you might not even be so impressed anymore since you already saw how beautiful the region around it is!

So to make sure you don’t miss out on some other impressive caves of the Algarve, a guided boat, kayak or SUP Tour is the best way to see the cave!

High season is between June and September, so make sure to book in advance to guarantee your seats on a tour to visit the Benagil cave.

The best watersports and boat tours in Portugal

What to do in Azores