After Texas and Copenhagen in June this year, in July the Redbull Cliff Diving will come to the Azores on the 7th. The Azores archipelago, part of Portugal, in the midst of the Atlantic Ocean will host the World Series of cliff diving for the fifth year in a row. If you like diving and have the chance to go to the Azores around July 9th, don’t doubt and join this great event on the São Miguel Island. The phenomenal volcanic rock formations of the São Miguel Island are perfect for cliff diving in the Azores!

While in most of the locations that take part of the World Series of cliff diving, the diving is done from an artificial “cliff”, in the Azores, we’ll return to origins, jumping directly from the rocks! The impressive rocks of the Azores islands will invite professional athletes to jump into the deep blue water of the Atlantic from incredible heights. This unique volcanic archipelago of the Azores, situated in the middle of the Atlantic Ocean, will serve as a starting point for the jumps from the rocks for the fifth consecutive year for men. Regarding the women’s  competition, after the huge success of last year, it will be held again on the small island of Vila Franca do Campo, near São Miguel. 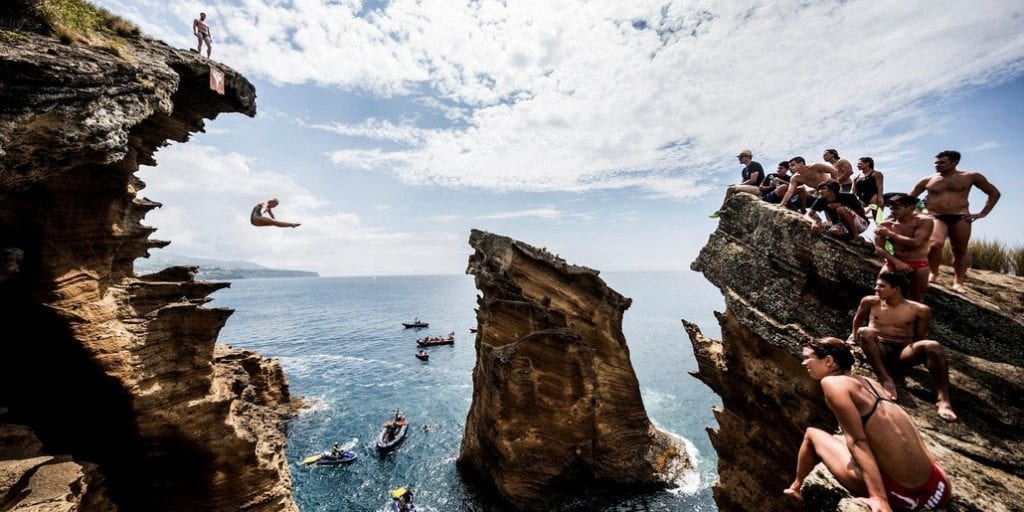 Rachelle Simpson of the USA dives from a 20 metre cliff during an open training day prior to the fifth stop of the Red Bull Cliff Diving World Series, Islet Franco do Campo, Azores, Portugal on July 15th 2015.

The motto of the cliff jumping at the Azores is back to the roots. The inspiring volcanic rocks and the outer walls of the circular islet are ideal spots for athletes to explore this sport in its purest form. This is the pure cliff diving: opening your wings and jumping directly from the rocks as the pioneers in cliff jumping did in Hawaii about 250 years ago. Only for the more technical jumps the athletes can choose to jump from a platform built above the ocean.

The women’s competition of cliff diving in the Azores will take place on the islet of Vila Franca do Campo. This islet is so called after a village on the island of São Miguel.  The islet of Vila Franca has been used for several purposes. After having been used for a military fort, it was turned into a vineyard and recently, the islet has been classified as a nature reserve (since 1983).

Characteristics of the World Series of cliff diving on the Azores:

Located in the middle of the Atlantic Ocean, about 1.369km west of mainland Portugal, on the European continent,  the Azores have nine islands divided into three groups. The Azores are a great holiday destination for nature lovers. Not only for cliff diving, or assisting to the World Series, but also to practice water sports yourself. The Azores are worldwide known for its great conditions for whale watching for example.

So, if you’re visiting the Azores, enjoy the ocean with one of the many watersports or boat tours and if you’re around São Miguel on July 7th, join this great event.