We went on a submarine tour in Tenerife!

In Tenerife, I stumbled upon a new exciting activity to do. A submarine tour in Tenerife! Yes, you can go exploring the underwater world without getting your hair wet! For some people, diving can be pretty overwhelming experience but with this activity, it is possible to see the sea life without diving. Well, you will dive, but inside one of the few 15 commercial most hi-tech tourist submarines operating in the world today.

I went on a submarine tour in Tenerife!

I wanted to try something new, so I decided to do this tour in a submarine tour in Tenerife. The harbor of San Miguel is very spacious and there is a large selection of boats and yachts, but it’s pretty impossible to ignore the yellow submarine down at the end of the harbor! You could immediately see many families and groups already excited by the idea of diving in a submarine. Families, friends, couples or as me (alone), everyone was welcome! This submarine tour in Tenerife is suitable for everyone! I have to say that immediately you notice that everything is very well organized, and you don’t have to worry about anything.

I had a warm welcome by the friendly staff and they gave me a quick explanation of the tour and I received my ticket to enter the submarine. I was introduced to Gioia who would lead the tour and explain everything we could see during the tour. If I had any doubts or questions, then she could explain it to me in detail. 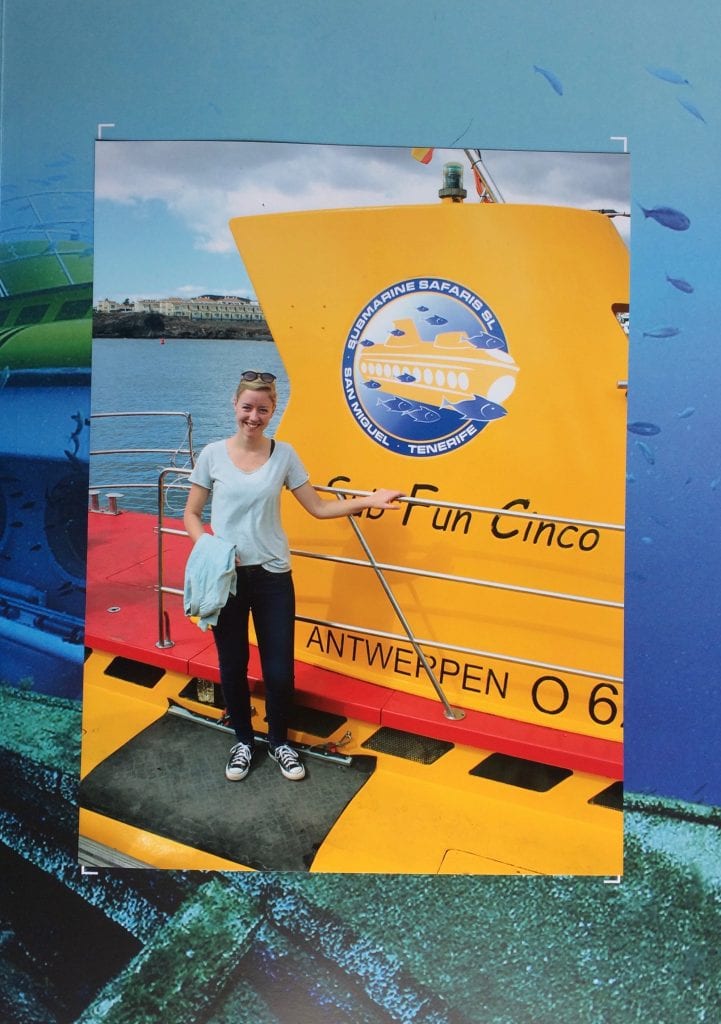 A picture to remember the excursion

Before departure, I was waiting in the sun and I saw buses arriving with people who also wanted to go on a submarine tour, I thought that was a great alternative to the logistics of bringing a car. Although I would definitely still recommend renting a car to discover the island as public transport isn’t as well organized as you would hope.

Before entering, the staff took a picture of each group on top of the submarine. Then they guided me to my seat and I was really amazed by seeing the captains place (yes, I was sitting really close!). Once everyone took their seats, Gioia, our tour guide, told us more about the submarine and we could see a live feed of the submarine disappearing into the water. We all have this general idea of what a submarine is, but when you actually sitting there experiencing the dive it’s all a bit crazy being underwater with 40 other people. While we were taking off, Gioia explained everything in three different languages (Spanish, English and German). It’s cool because when I asked her she told me she speaks five different languages fluently (Spanish, English, German, French and Italian). So there’s no need to worry about not understanding, from what I understood, all the guides are multilingual. 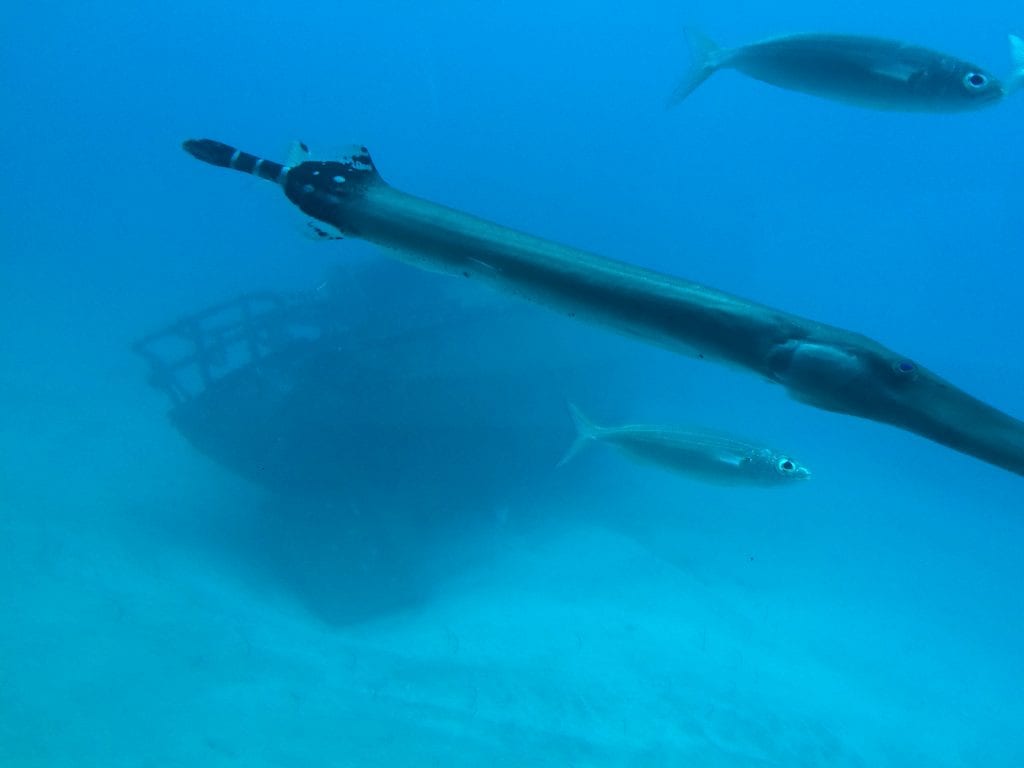 We could see a wreck and several species of fish

It was funny that from the very beginning there was one single fish swimming next to my window which I thought was already amazing, but as I was about to find out this was just the beginning! Shortly after I saw a shipwreck, different schools of fish and rays! During the tour there was always a support boat with us for extra safety as well as divers, which I discovered later were feeding the fish and all of a sudden there were so many, it was amazing!

This dive took us down over 30 meters below the Atlantic Ocean and it is so weird because I was just sitting on a chair behind a window and the atmosphere is totally normal. You don’t even notice you are diving that deep. And I can tell it’s deep because I dived before and my ears were hurting already at 23 meters. 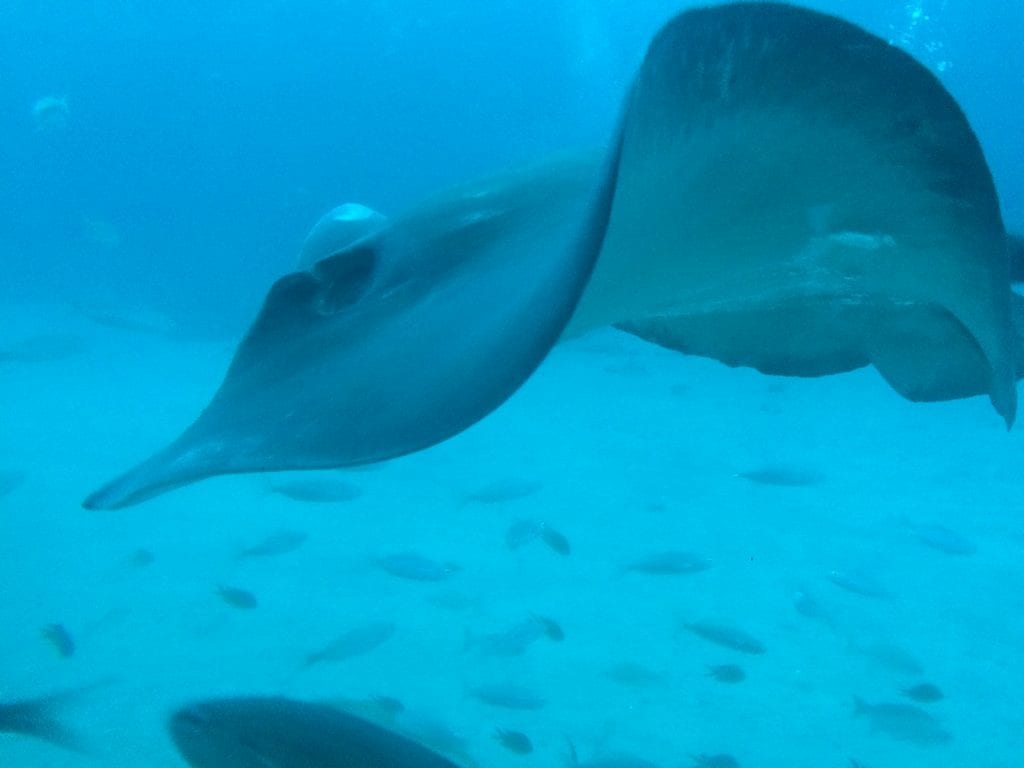 The rays were impressive!

I really recommend this tour to everyone because it is so much fun to do this and talk about what you are seeing during the dive (with a normal dive you can’t talk of course). So, even your old grandmother of 84 years old or your 2-year-old nephew can have this amazing experience! 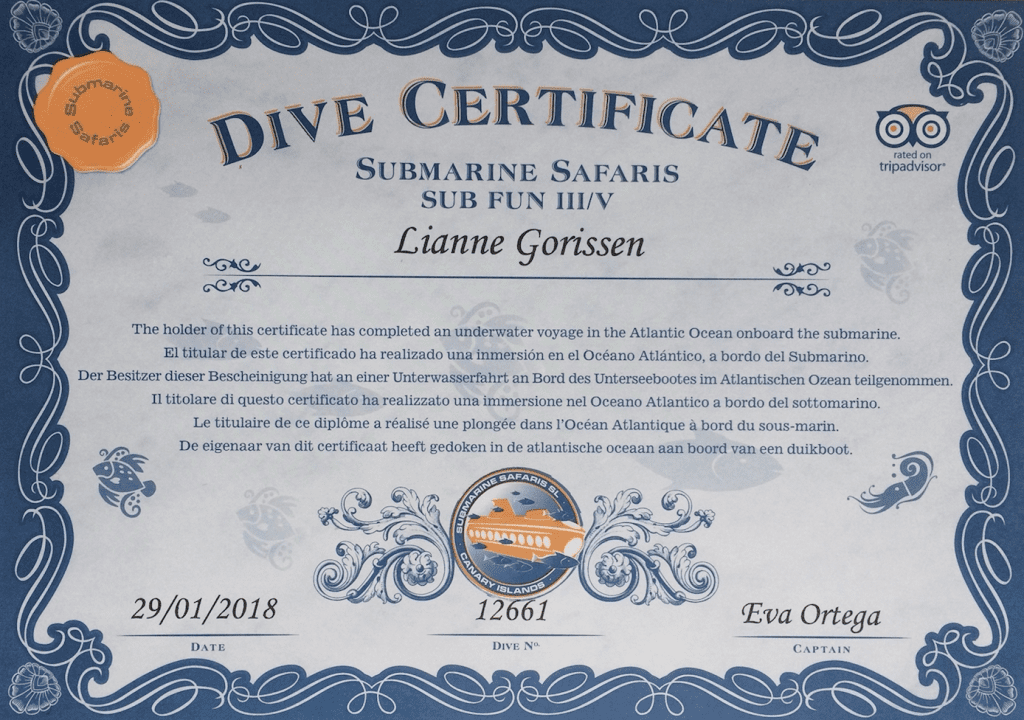 And I got my certificate of this submarine tour in Tenerife 🙂

In the end, everyone received their personal diving certificate stating that you have completed an underwater submarine voyage in the Atlantic Ocean. Oh, and the photo they took before departure is a gift as well. That is a very nice souvenir, isn’t it? Thank you very much Goia for the clear explanations during the tour, I really enjoyed it. If I go back to Tenerife I would definitely do this submarine tour in Tenerife again!

Find out more or book here!