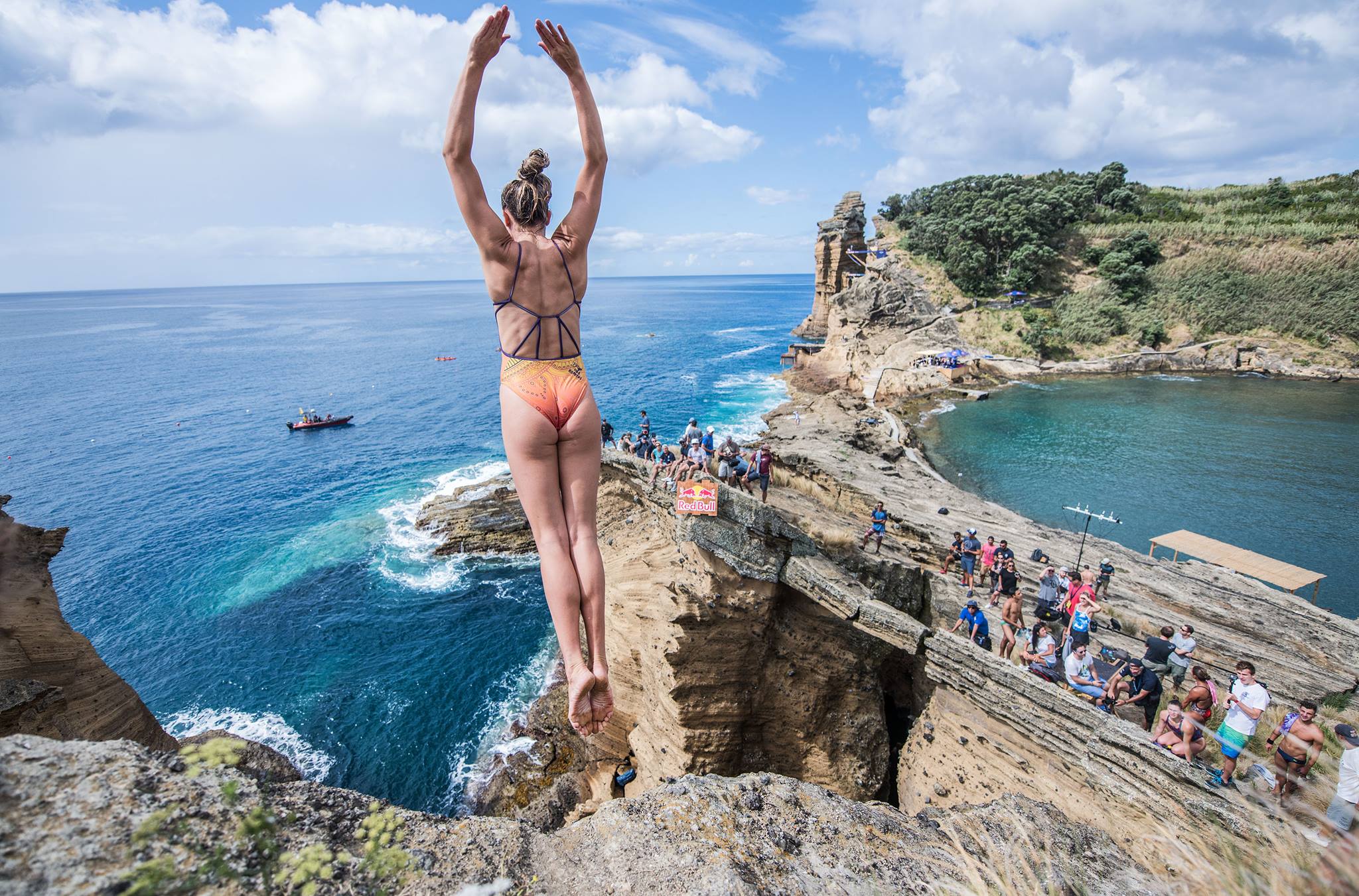 Did you already hear about the Red Bull Cliff Diving Series? This super exciting event takes place all around the world, at 7 different locations, to find the best female and male cliff-diver! The jumps they do are spectacular, and watching the divers jump from up to 27m with such elegance and doing amazing acrobacy at the same time, is definitely breathtaking!

One of the stops of the World Series is at the beautiful islet Vila Franca do Campo in the Azores! The “Princess Ring”, a volcanic islet in the middle of the Atlantic Ocean is a really magical place and it is here that the world’s best cliff divers will compete for the trophy! And if you’re in the Azores around June 22nd, it is an event that you shouldn’t miss! And what better place to watch it than from the sea, where you can see how the divers dive in precisely right in front of you? Surely that’s the best option to watch the Red Bull Cliff Diving in the Azores!

The Red Bull Cliff Diving in the Azores is the 4th stop on the World Series. Before, the divers will already have jumped off cliffs in the Philippines, Dublin and Italy. But for us, the stop in the Azores is definitely the best one, since we love the Portuguese archipelago not only for their steep cliffs but for the many other sea-related activities you can do there!

For you to get the most out of your trip, we came up with this ultimate guide to the Red Bull Cliff Diving in the Azores. After all, the event will only be one day, but the Azores have a lot more to offer as well! So make sure to plan some extra days to get the most of this island!

The Red Bull Cliff Diving in the Azores will take part in the little islet of Vila Franca do Campo. It’s a natural reserve since 1983, and besides the steep and impressive cliffs the divers are going to jump from to perform impressive figures and do multiple spins, this little islet has a lot more to offer! So why not take a walk after the event, to be impressed by the unique landscape?

During the competition of the Red Bull Cliff Diving in the Azores, the men and women will show off their skills. It sometimes even seems unreal, with what kind of precision and control they perform the figures while jumping from such heights! It will surely leave you in awe, and maybe you will even get inspired to start some easy cliff jumping yourselves – if you’re brave enough because one thing is for sure: You gotta have some serious balls for this!

The islet Vila Franca do Campo lies about 1km away from the shore of the Azores’ most popular island São Miguel. You can easily get there by boat of course. But why stop there? There is so much more to explore around São Miguel, so if you have the time, you should definitely join a boat tour to explore not only the islet but also the rest of the impressive coastline! This boat tour, for example, will take you on a full day tour to explore the region completely and get a feeling for the real authentic way of life of the Azores!

Did you also know that you can observe whales and dolphins, and even go swimming with dolphins in the Azores? You can do so from São Miguel but also from Faial! So if watching the Red Bull Cliff Diving in the Azores isn’t enough excitement for you already, you should go on another adventure and find some of the wild cetaceans living in or passing by the Azores!

Finally, your ultimate guide to the Red Bull Cliff Diving in the Azores wouldn’t be complete without some delicious recommendation for food! The most famous exports from the Azores when it comes to food are probably beef and cheese. But if you’re on the island, you should also try some of the super fresh seafood of course. The famous Lapas for example, a kind of sea-snail, is a real delicatessen in the Azores and if you’re brave enough to watch the Red Bull Cliff Diving in the Azores, you should also be brave enough to try Lapas! 😉 And not to forget – the Azores have some unique and delicious wine, that goes perfectly together with any kind of meal!